Shareholders in Brazilian-based aircraft manufacturer will vote on proposed $5.25bn sale of business to Boeing 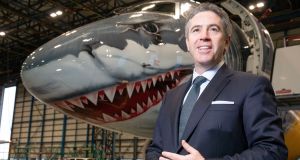 John Slattery, CEO of Embraer Aviation. “I have 19,000 employees that work for me, and a small percentage are female.” Photograph: Peter Houlihan

The Clare-born president and CEO of the commercial arm of Embraer Aviation has said the airline industry “is deeply lacking in an embarrassing fashion in females in the business”.

“I have 19,000 employees that work for me, and a small percentage are female,” said John Slattery, who was speaking at a Shannon Chamber of Commerce event at Dromoland Castle.

Mr Slattery said that across the airline business, “we have no females in the cockpit of aircraft – if you see a female pilot it is a novelty”. Women were lacking across all strands of the business from leadership positions down, and that had to change. “It should be 50/50.”

He confirmed that Embraer shareholders would vote next month on a proposed $5.25 billion (€4.6bn) sale of the business to Boeing. “I am hopeful that the shareholders will see it as a good deal.”

The Ennis man leads a workforce of 19,000 at Embraer’s commercial business, and said the deal had been ratified by the Embraer board and the Brazilian government. He said the firm told shareholders this week that they are to receive a $1.6 billion cash dividend.

The younger brother of Dómhnal Slattery, the chief executive of aircraft leasing giant Avolon, Mr Slattery said the market capitalisation of the Brazilian-based aircraft manufacturer Embraer today was $4 billion, and “I am selling my business for $5.25 billion”.

The proposal deal is taking place during what Mr Slattery called a down-cycle in the airline business. He said that the deal was part of a consolidation in the sector.

“We are clearly in the down-cycle. It is a nice soft landing, and let’s hope the cycle is shallow, and that is what everyone wants. You probably have another two years of a soft down-cycle.”

As part of the down-cycle, Mr Slattery said “you will see more bankruptcies, you will see more restructuring”. He described Shannon Airport as “a jewel”, but said the airport had to improve connectivity, pointing out that he had to fly from JFK into Dublin as there was no flights into Shannon.

Mr Slattery said Shannon could not become a cargo-based airport, stating that the US pre-clearance facility at the airport was grossly under-utilised.