No turning back: New CIÉ head ready to get Dublin moving 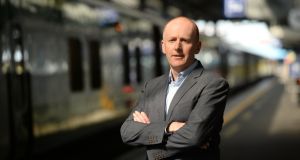 Lorcan O’Connor played with a train set as a kid. His children now have their own and he likes to play with them on occasion.

But, sitting in the old mapping room of Dublin’s Heuston Station, looking out on tracks heading west, the insolvency practitioner-turned-transport czar has another, far more ambitious play in mind.

As the new head of CIÉ, the holding company that sits above Irish Rail, Bus Éireann and Dublin Bus, the 43-year-old accountant see possibilities in his new role to transform CIÉ’s underused property portfolio to help ease the congestion that is choking the capital city, and create a living space at a time of housing shortages.

Given that the three transport companies are effectively independent republics operating on their own, O’Connor’s role as CIÉ’s boss is essentially that of property manager and pension deficit reducer, along with manager of the shared services such as on IT, finance and treasury to the group’s transport subsidiaries.

On the property front, he is looking at the bigger picture and creating property development solutions for CIÉ that arise from two of the greatest challenges of our time – traffic congestion and environmental issues – by unlocking the public transport possibilities and the potential from CIÉ’s massive landbank.

“Transport and environmental matters are very much merging now. It is not just a Dublin issue – if you look at any of the cities across the country, they are being choked with car traffic,” he says. “And that is just not sustainable in not only the long term, it’s not really sustainable in the short to medium term, particularly now with climate change issues and so on. And the only way to solve that is through modal shift.”

He spies immediate opportunities in the largest transport hub in the State controlled and operated by the company: Heuston Station, the western gateway into Dublin city centre.

There is a possibility to redevelop the 173-year-old station as a “really significant” mixed-use development of homes, shops and offices, he says.

O’Connor sees it as a “very unique” point where buses, trains – both inter-city and commuter – as well as Luas trams and cycle lanes converge. It is a project that could also help wean Dublin off the heavy dependence on cars that clogs up the city centre’s main arteries.

“If you think of the location of Heuston Station, it is in effect a sort of bookend of the city centre. You have got the docks at one end of the Liffey and you have got Heuston at the other end. There’s certainly potential there for an iconic building that is significant in the overall context of the city,” says O’Connor.

It is not quite a Colossus of Rhodes-type structure on the gateway into the city that the Dubliner has in mind, but it has the potential to challenge the landmark 22-storey tower at another station in CIÉ’s portfolio – Tara Street, for which property developer Johnny Ronan has won approval – to be Dublin city’s tallest structure.

“Certainly, that is something worth considering,” says O’Connor, of the potential to build that high.

As he sees it, there are about 20 acres – half the land at Heuston Station, mostly hugging the River Liffey – that could be developed. Over time there may be opportunities to develop over the other 20 acres, building over the railway lines, for example, but he concedes that this will not be on the cards in the initial development phase.

A quick glance at Google Maps and you can see the development potential that excites the new CIÉ chief. He points to the Clancy Quay development of hundreds of apartments and commercial space further up the Liffey at Islandbridge that currently has no direct pedestrian access to Heuston Station.

All told, O’Connor believes that there could be more than 150,000sq m of space to be developed, split roughly two-thirds residential to one-third commercial or retail. That is a lot of space. Think Dundrum Town Centre big.

How high the development could go depends on the finalisation of the master plan for the area,to be carried out in consultation with Dublin City Council, and, ultimately, of course the approval of planners, he says. “But I would envisage, because of the very strategic location of Heuston and the fact that it is a bookend to the city, and beside the transport hub, that it would warrant a special building and one that is worthy of its location,” he says.

O’Connor has to look at the transformation of the King’s Cross area of central London for a template on how the Heuston Station hub could be designed. That has been redeveloped making use of a major transport hub and attracting Google and other technology companies into the area, making it a pleasant place to travel and walk through – and to live and work in without the congestion of cars.

There are other examples of property developments around Europe built next to railway, transport and cycling hubs where train stations are “the centre of the development and not an afterthought”, he says.

All these plans fall at a landmark moment for CIÉ as it celebrates its 75th anniversary in January, and the company plans for the coming decades as Ireland’s population rises by a million people by 2050. More than €8 billion is earmarked for spending on public transport under the Government’s Ireland 2040 plan.

Severe traffic problems haves made Dublin the 14th most-congested city in the world and sixth in Europe, according to the TomTom Traffic Index. The Department of Transport has put the annual cost of congestion at €30 million, with the potential for it to rise to close on €2 billion by 2031 under a do-nothing scenario.

“It’s a fact of life that do nothing is not an option,” says O’Connor.

The BusConnects project, which aims to deliver 230 kilometres of dedicated bus lanes and 200 kilometres of cycle tracks along 16 of Dublin’s busiest transport corridors, has stirred controversy because it proposes remove parts of residents’ front gardens, but O’Connor says an efficient movement of buses is key across major cities.

“There is no reason why some of the bus routes couldn’t be operating at twice their current speed. That would mean they could carry twice as many passengers, twice as many departures with the same fleet and the same number of drivers,” he says.

Objectors, he suggests, must use the public consultation process to offer constructive alternatives. “If the answer from people there is ‘no’, I think what’s incumbent on them is to come up with an alternative, because doing nothing is not an option,” he says.

Another area where the former financial restructuring adviser is likely to hear a lot of “nos” is on his plan to reduce CIÉ’s pension deficit, which stood at €547 million at the end of 2018, one of the largest in any State-owned body.

“This is something that we can’t turn a blind eye to any longer,” he says, but he remains tight-lipped on potential solutions to the company’s breach of statutory regulations covering pensions.

“I would say that all options are on the table at this stage. You know, there are several ways to skin a cat,” he says.

He refuses to be drawn on the possibility of converting the fund from defined benefit to a defined contribution scheme, following a path that many private companies have taken, or making a sweetener payment to the company’s 10,000-plus employees to bring them and their trade unions onside.

“All options are on the table,” he says.

O’Connor’s restructuring work on distressed financial jobs such as glass and ceramics manufacturer Waterford Wedgwood and bookseller Hughes & Hughes – and more recently as director of the Insolvency Service of Ireland, attempting to put the post-financial crash personal insolvency regime on an operational footing – puts him in good standing to fill CIÉ’s pensions black hole.

The challenge at every company is balancing the books at the end of a given year and CIÉ is no different, he says, though he recognises that the bulk of public transport is not economic.

Bus Éireann’s financial difficulties (the company was “technically solvent” last year) have been turned around, with the company recently posting a profit of €1.6 million for 2018. O’Connor says it was hit with “a perfect storm”: the financial crisis, falling passenger numbers, reduced State funding and private competition on expressway services.

In the context of Brexit now, and all of the preparatory plans, Rosslare is certainly seen as a very strategic asset

Since the turnaround, the company has shown it can grow, he says. “They are on a more stable footing. So long as we can continue with a relatively stable cost base, there are large, significant opportunities for the company into the future,” he says.

O’Connor says he can understand how people see Rosslare Europort, which is in CIÉ’s portfolio, as an odd fit for a rail and bus company, but he sees the port as throwing up opportunities for freight and passenger transport by rail to the southeast, particularly with Brexit on the horizon and the need for new sea routes around the UK.

“In the context of Brexit now, and all of the preparatory plans, Rosslare is certainly seen as a very strategic asset and one that could help from an exporting perspective into the future,” he says.

O’Connor admits to finding recent reports about antisocial behaviour and acts of violence against staff and customers on public transport as being “quite disturbing”, but he says the actual number of incidents are falling.

He challenges the regular complaints about transport delays on social media and elsewhere with statistics: CIÉ has a punctuality rate of more than 95 per cent and the company is carrying 25 per cent more passengers per employee than 10 years ago, he says.

More generally, he feels public transport users, who make up more than 50 per cent of commuters, often do not have their voices heard as loudly as others, such as car users, who account for less than 30 per cent.

“They are sometimes a victim of the fact that they’re not as vocal as some of the other groups in terms of the debate around public transport and indeed climate change,” he says.

The recent declaration of a climate emergency by the Government, the recommendations to combat climate change, and the growing awareness of environmental concerns, all point to the need for more public transport, which makes O’Connor’s job all the more important in the years ahead.

“We’re going in a particular direction,” he says, “and really, there’s no option to turn away from that in any way.”

Name: Lorcan O’Connor.
Position: Chief executive, CIÉ.
Age: 43.
Education: Business & legal studies graduate of UCD, chartered accountant
Experience: Worked as an adviser on insolvency cases with accountancy firm Deloitte before going on secondment as a financial adviser at the Department of Transport. Prior to taking up his current role in March, O’Connor was the director of the Insolvency Service of Ireland.
Home: Churchtown in Dublin.
Family: Married with three children.
Something that might surprise: He enjoys running up mountains in Wicklow.
Something you might expect: He does not own a car and takes public transport to work.