Ryanair claims it is greenest airline in Europe on emissions 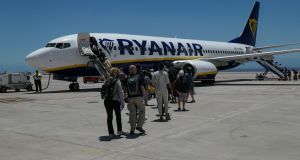 Ryanair says it has the lowest greenhouse gas emissions per passenger of any European airline as it releases figures detailing its impact on the atmosphere for the first time today.

Aviation is one of a number of industries coming under pressure as public fears about global warming grow, with environmentalists arguing that it adds to the carbon-dioxide emissions that are heating the planet.

The Irish airline is publishing figures on Wednesday showing that it produced 66g of carbon dioxide per passenger for every kilometre its craft travelled in May.

Chief marketing officer Kenny Jacobs pointed out that Ryanair would be the first EU airline to begin publishing monthly greenhouse gas data and maintained that it showed the carrier had close to half some its rivals’ emissions.

According to the figures, Ryanair flew 14.1 million people in May over 17.529 million KM, producing a total of 1,157 kilo tonnes of carbon dioxide, which left it with 66g for each individual customer for every KM.

Mr Jacobs explained that Ryanair’s young fleet, its craft average six years old, burns less fuel than the older models used by some competitors, such as British Airways and Lufthansa, which have planes up to 20 years old.

“It’s all about the aircraft,” he said. “BA, Lufthansa and Air France KLM are flying older aircraft, particularly on their longer routes.”

Ryanair sells 96 per cent of the available seats on its planes, while others sell 80-85 per cent. Thus, Mr Jacobs noted, it was flying more passengers on craft burning less fuel.

The airline expects this to improve as Ryanair brings the Boeing 737 Max craft it has ordered into service, as they burn 16 per cent less fuel and carry 4 per cent more passengers.

Mr Jacobs maintained that the “CO2 per passenger per kilometre” formula was a recognised, transparent way of measuring transport emissions, including air travel.

Ryanair wants any tax on airline emissions to be consistent and fair. Mr Jacobs said a recent Dutch government proposal to tax flights was simply designed to protect Amsterdam Schiphol Airport, as it excluded connecting flights, even though these could emit more carbon dioxide per passenger than direct journeys.

He also rejected calls from environmentalists for the public to reduce flying. Official figures show that air travel contributes 2 per cent of Europe’s greenhouse gas emissions. “You produce more carbon dioxide driving around in a 10-year-old car,” he argued.

Ryanair maintains that disruption caused by air-traffic-control staff shortages and strikes forces European airlines to fly longer routes, burning up to 20 per cent more fuel in the process.

Mr Jacobs suggested that if the EU tackled this, it would have an immediate impact on air travel emissions. “If Brussels wants reduce CO2 by 5 per cent in the next 12 months they just need to regulate air-traffic control instead of leaving it to member states,” he said.