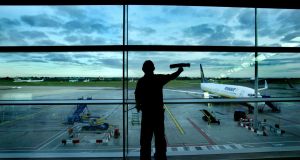 Business lobby group Ibec has said a ruling by regulators to cut passenger charges at Dublin Airport by up to 18 per cent could threaten investment projects at the facility and undermine the State’s ability to trade internationally.

The Commission for Aviation Regulation, which sets the fees the airport charges airlines for passengers, said on Thursday it was cutting passenger charges by up to 18 per cent to an average of €7.87 a head over the five years to 2024.

The commission said this would be an 11 per cent cut on 2019’s price cap of €8.81 and predicted it would save airlines and passengers €320 million over five years.

Dublin Airport operator DAA could challenge the ruling and has maintained that airlines actually pay a maximum of €9.30, making it an 18 per cent reduction.

The DAA said it was “hugely disappointed” as it had wanted to be allowed to charge €9.65, its 2018 cap, to fund a €2 billion expansion to cater for an expected increase in passengers to 40 million a year from around 30 million.

Commenting on the importance of Dublin Airport as a national strategic infrastructure asset, Ibec chief executive Danny McCoy said Brexit and other challenges meant that investment was needed.

“Our economy and population continue to grow faster than almost all other developed countries,” he said. “It is vital that we invest ambitiously to keep up with this growth.

“Dublin Airport is a key element of our national strategic infrastructure, and the wider business community would be very concerned if planned investment projects were threatened because of the proposed reductions in passenger charges.

“As a country we have failed to invest adequately in infrastructure over many years. Failure to urgently address our widespread infrastructure deficits will undermine national competitiveness and damage our ability to trade internationally and attract mobile investment.

“With Brexit uncertainty undermining business investment decisions, it is vital that we intensify our focus on the issues that we can control, such as infrastructure investment.”