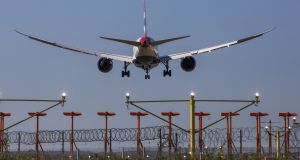 IAG, whose other airlines are British Airways, and Spanish carriers Iberia, Vueling and Level, said on Thursday that operating profit for the nine months ended September 30th fell 9 per cent on the same period last year to €2.52 billion.

Speaking after the group published the results, Mr Walsh said that in light of “macro economic” weakness in Europe, the group could slow the rate at which it grows its short-haul business next year.

“That is for all our airlines, not specifically for Aer Lingus,” he said. He noted that short-haul, where the Irish and other carriers face low-cost rivals led by Ryanair and Easyjet, remained highly competitive.

IAG is likely to provide more detail on the plans to rein in growth when it meets shareholders at a capital markets day next week.

Mr Walsh stressed that Aer Lingus would continue growing its transatlantic business. “I would be hopeful by this time next year we will have announced new destinations for 2021,” he said.

Aer Lingus added flights from Dublin to Minneapolis in the US last July, but delays in new aircraft deliveries forced it to postpone a planned service to Montréal in Canada to next year.

IAG has since agreed a new schedule with Airbus for delivery of the European manufacturer’s A321LR (long range) craft to Aer Lingus.

Meanwhile, he welcomed a recent decision by the Commission for Aviation Regulation to cut Dublin Airport’s passenger charges by 18 per cent to an average of €7.87 between 2020 and 2024.

Mr Walsh noted that the regulator opted for a slightly higher charge than the €7.50 proposed in May. “It’s a good determination,” he said, adding that it would allow the airport to invest significantly in infrastructure.

Disruption cause by a first strike by British Airways pilots since 1979 dented third quarter profit, which was down 7 per cent at €1.43 billion. Analysts had predicted a figure of €1.44 billion.

Full-year earnings will be 6 per cent or €215 million lower than first forecast due to the strikes and depressed fares at low-cost arms Vueling and Level, IAG said, confirming guidance from last month.

The September walkout upset travel plans for close to 200,000 people and led to a hit of €155 million on operating profit. Mr Walsh said that the strike aside, the company had reported “good underlying results”.

IAG has lowered capacity growth this quarter, trimming the 12-month figure to 4 per cent.

Like its peers, IAG has been grappling with the impact of a glut of seats across Europe together with fluctuations in fuel prices – factors that contributed to the collapse of UK tour operator Thomas Cook and eight other carriers in a little more than a year.

IAG shares had declined 10 per cent this year as of Wednesday, cutting its market value to £10.3 billion. German rival Lufthansa is down 21 per cent while Air France-KLM has advanced 14 per cent amid turnaround efforts under new chief executive Ben Smith. – Additional reporting: Bloomberg