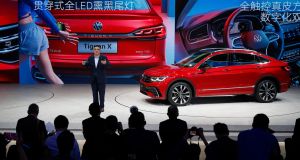 Prices of popular new cars could rise by up to €10,000 if recommendations from the Tax Strategy Group are implemented in next month’s budget.

According to figures from the Volkswagen Group, which has a 28.6 per cent share of the new car market through its brands, prices for its best-selling Tiguan crossover with a 2-litre diesel engine could rise by €6,335 if the tax changes are implemented. Even the 1.5-litre petrol manual transmission version would rise by €3,439, while the seven-seat people carrier Sharan, with a 2-litre diesel engine and automatic transmission, would go up by €10,061.

At Skoda, prices for the brand’s popular Karoq small crossover with a 1-litre petrol engine would rise by €2,864, while variants of the larger Skoda Kodiaq diesel crossover will rise by as much as €5,969.

Rival car brand Hyundai, with a 9.5 per cent share of the new car market, estimates some of its models may rise by €2,000. Its managing director, Stephen Gleeson, described the Tax Strategy Group’s proposals as “beyond belief” in the current Covid-19 economic crisis.

The proposed changes are partly driven by the introduction of a new emissions testing regime – known as WLTP – across Europe. The new tests, introduced after the VW emissions-cheating scandal, mean that many cars are being assigned higher official CO2 emissions figures. For countries such as Ireland, that impacts on the tax applied on new cars as vehicle registration tax (VRT) and motor tax rates are based on the official CO2 figures.

The Tax Strategy Group report said there was an “argument that VRT charges were far too low during the last decade as the rates applied were based on vastly underestimated CO2 values”.

It proposed creating 20 VRT tax bands instead of 11 currently, with many cars falling into higher bands than at present.

According to Carla Wentzel, VW Group Ireland managing director, the proposed changes “have the potential to encourage further imports of used vehicles from other jurisdictions, which lead to a drop-in tax-take for the Government and contradict the aims of reducing the average CO2 emissions, as these cars are often higher emitting vehicles”.

She said adopting the Tax Strategy Group’s recommendations would further damage an industry already hit by the impact of Covid-19 – with new car sales down 27.5 per cent.

“Paralysing the consumer in the short-term from moving into cleaner cars due to sharp price increases will only retain the attractiveness of higher-emitting used-car imports which will hurt the environment and the VRT tax take. Forcing customers into EV models that as yet aren’t available en masse will not achieve the objectives for a cleaner Irish car fleet,” she said.

The Tax Strategy Group is chaired by the Department of Finance, with membership comprising senior officials and political advisers from several departments and offices. Its research papers are used to inform budget strategy.