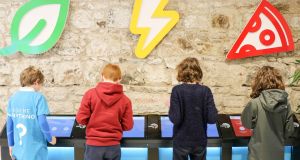 The Themed Entertainment Association has awarded the interactive Enniskerry attraction a “Thea” award for outstanding achievement, with the judges citing it as “a great application of themed entertainment and storytelling”. The honour will be formally presented at an event at the Disneyland Resort in Anaheim, California, next April.

The world’s first climate action visitor centre, Cool Planet Experience aims to help visitors of all ages learn about climate change while discovering more about the solutions being devised to help combat it. The centre was officially opened by Richard Branson in January 2018.

“The Cool Planet Experience story began because we were frustrated by the negative, disabling narrative that existed around climate change, and we wanted to create something exciting, educational but fun that would inspire our visitors to change their behaviour and become ‘agents of change’,” said chief executive Vicky Brown.

Cool Planet Experience was designed and produced by Dublin-based DMW Creative and associates, the team behind attractions including the GPO Witness History museum and the upcoming Irish Racehorse Experience at the Irish National Stud.