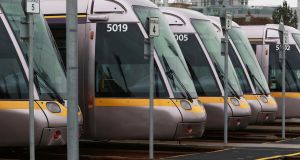 There was an 11 per cent rise in the number of people using the Dublin city tram service along its two lines, with the service recording a record 41.8 million passenger journeys.

The directors attribute the increased losses to the cost of bidding for a new Luas contract, which the company secured, and to increased staff costs in line with a Labour Court recommendation.

Transdev is to commence the new six year Luas contract, with a further five year option, from next Sunday, December 1st.

The 2016 Labour Court recommendation allowed for a salary increases of up to 18.3 per cent.

The losses came as revenues increased by 17 per cent from 33 million to 38.68 million as Transdev benefited from the first full year operation of the Luas Cross City extension.

The directors state that the increase in revenues is a result of full year operations of Luas Cross City, timetable changes and one-off additional works.

However, a spokeswoman for Transdev said on Tuesday that the losses also reflect the impact of the opening of Luas Cross City. She stated: “The Green Line extension increased energy consumption. In addition to the increase in energy costs, employee numbers grew too.

“Transdev recruited drivers and revenue protection officers. These additional staff are paid under the new wage costs as agreed by the Labour Court in May 2016.”

Numbers employed at the transport company last year increased from 324 to 355 with staff costs increasing by 13 per cent from 16.8 million from 18.99 million.

Earnings before interest, tax, depreciation and amortisation was €2 million last year compared to €172,017 in 2017.

Shareholders’ deficit at the end of last year totalled 2.26 million. The company’s cash pile increased from 320,694 to 3.55 million.