EasyJet to offset carbon emissions from all its flights 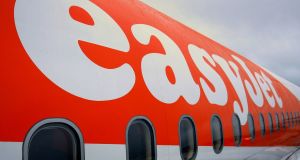 EasyJet has reported a 26% fall in pre-tax profit to £427m for the year to the end of September, which is at the upper end of expectations of £420m to £430m. Photograph: Gareth Fuller/PA Wire

EasyJet has unveiled plans to become the first big airline to operate net-zero carbon flights across its network as the industry comes under increasing pressure from climate change activists to reduce emissions.

The European budget carrier said it would offset all carbon emissions from fuel used on its flights from Tuesday, a measure that will cost it around £25 million (€29.2m) in the next financial year.

The pledge came as EasyJet reported a 26 per cent fall in pre-tax profit to £427 million for the year to the end of September, which was at the upper end of expectations of £420 million to £430 million.

“We recognise that offsetting is only an interim measure, but we want to take action on our carbon emissions now,” said chief executive Johan Lundgren.

Airlines account for about 2 per cent of carbon-dioxide emissions globally, but also emit other damaging substances such as nitrogen-oxide and contrails, the long thin clouds of frozen vapour that are visible from the ground.

Carriers have begun responding to the growing “flight shame” movement. Air France and British Airways last month announced plans to offset all domestic flight emissions from next year. BA said the move to offset all UK flights would cost about £3 million next year.

These commitments take the groups further than the general aviation industry which has set a general target of a 50 per cent cut in emissions from 2005 levels by 2050 through offsetting in the Corsia scheme set up by ICAO, the UN aviation agency.

Companies offset emissions by investing in environmental projects such as growing more trees to balance their carbon footprints, but some have criticised these schemes as a get-out option.

Mr Lundgren said EasyJet would continue to support the development of new technology, including electric aircraft as a longer-term answer to the climate crisis.

Total revenue at the company rose 8 per cent to £6.4 billion, although EasyJet blamed weakness in consumer confidence for a 2.7 per cent decline in total revenue per seat once the effect of foreign exchange fluctuations was stripped out.

The airline said forward bookings for the first half of the 2020 financial year were slightly ahead of last year, but that expected capacity growth for the year to September next year would be at the lower end of historic guidance of between 3 per cent and 8 per cent.