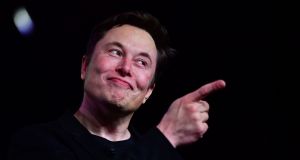 “We are making an effort to gradually deliver before the Spring Festival to let our customers drive our China-built Model 3 sedans back home for the holidays,” Tesla said. The Spring Festival, a weeklong holiday marking the lunar new year, begins January 25th.

The deliveries would come from the first batch of cars that Tesla produces in bulk later this year – not the test vehicles that the company has been manufacturing in small quantities recently. Tesla said in October that it expected to begin deliveries to customers in the first quarter but didn’t specify which month.

China’s first plant wholly owned by a foreign carmaker – and Tesla’s first outside the US – will be a crucial test for chief executive Elon Musk as he seeks to prove his carmaker can sustain profitability. The Shanghai Gigafactory, which broke ground in January, will initially build Model 3 sedans that will compete with electric cars from local contenders such as NIO and Xpeng Motors, as well as global manufacturers including BMW and Daimler.