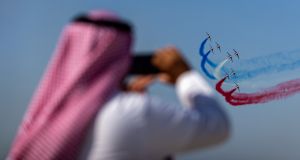 Emirates has ordered 50 Airbus A350 jets worth $16 billion (€14.5 billion) at list prices, which would help the Dubai government airline serve more markets as it seeks to improve the flexibility of its fleet.

The deal replaces an initial agreement in February, when Emirates announced an intention to buy 30 A350s and 40 A330 Neos.

Emirates operates an all wide-body fleet of Airbus A380s and Boeing 777s, serving 150 cities from its hub in Dubai.

“Complementing our A380s and 777s, the A350s will give us added operational flexibility in terms of capacity, range and deployment,” said Sheikh Ahmed bin Saeed Al Maktoum, Emirates chairman and chief executive.

The A350, which is powered by Rolls-Royce Trent XWB engines, would allow Emirates to serve a range of new markets within the region and on long-haul missions of up to 15 hours from Dubai, the airline said.

Emirates said it intended to equip the A350s with different cabin combinations, including a “premium economy” option. – Copyright The Financial Times Limited 2019