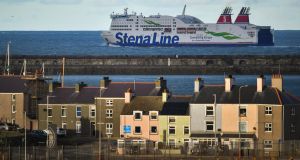 A Stena ferry departing Holyhead for Dublin on January 1st. Stena is reviewing its Irish Sea schedules because of Brexit and Covid restrictions. Photograph: Bloomberg

The largest Irish Sea ferry operator has cancelled 12 sailings over the coming five days due to travel restrictions, a post-Brexit decline in freight volumes and problems in supply chains.

Trade volumes have fallen significantly since the UK’s departure from the EU came into effect on January 1st as importers struggle with the customs, regulatory and agricultural border controls applied to all goods arriving into Irish ports from Britain in the past week.

These mostly off-peak sailings, including late-night departures, are not regarded as viable currently given the low freight volumes and the restrictions on passengers who must produce a negative Covid-19 test on their arrival into Irish ports from Saturday.

The Dublin-Holyhead route is the busiest on the Irish Sea, but transport volumes have dropped dramatically in the week since Brexit came into effect due to a combination of businesses stockpiling in the run-up to Christmas to avoid new border controls on goods from Britain and delays as firms try to manage new barriers to EU-UK trade.

Traders and hauliers have said that volumes have fallen dramatically as importers have been unable to move goods because they have struggled to have the correct information and paperwork in place to secure sign-off from the Revenue Commissioners to ship goods.

Multiple loads of products on single consignments requiring multiple customs declarations and health certificates for plant and animal products have left companies grappling with red tape to secure movement reference numbers (MRNs) to ship goods that are in turn required to secure pre-boarding notification (PBN) numbers to board Irish-bound ferries at Holyhead and Fishguard.

Paul Grant, Stena’s Irish Sea trade director, said the company was reviewing sailings and schedules on its Irish Sea routes as a result of the Covid-19 travel restrictions and the decline in freight volumes during the first week of Brexit.

“Problems in the supply chain have resulted in a significant fall in freight numbers this week at our Holyhead and Fishguard ports,” said Mr Grant.

“Our business model is predominantly based on the freight and passenger combination – to have the two parts restricted at the same time is putting pressure on our ability to maintain the normal level of frequency on certain routes.”

Mr Grant said the sailings were being reduced on a temporary basis. “Capacity can be reinstated quickly as demand picks up. In the meantime we need to be efficient in how we manage our schedules.”

Businesses were warned to prepare for post-Brexit border controls with a 12-fold increase in customs declarations to 20 million a year forecast on trade between Ireland and Britain.

9 C&C challenged, an ‘abyss’ in the North, and Joe Biden’s tech agenda