Fears grow of drastic reductions in flights to and from Republic 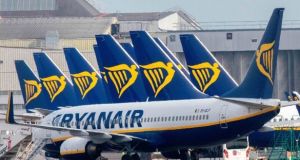 Fears are growing that the Republic faces further drastic reductions in flights as Aer Lingus reviews its 2021 plans, while Ryanair has pledged to cut services from the end of January.

Ryanair said on Thursday that it would operate few if any flights to or from the Republic or UK from the end of January until “draconian” Covid-19 travel restrictions were removed.

Its rival Aer Lingus later confirmed that it was reviewing the implications of extended travel restrictions for its operations this year. It is thought likely the carrier will follow Ryanair by cutting services to and from the Republic.

Aer Lingus said that it was reassessing its plans in light of the fact that the Government was considering extending travel restrictions.

Travel with Britain and South Africa is banned until the weekend. As of this week passengers arriving here from all other countries must show they have tested negative for Covid-19 within the previous 72 hours.

Ryanair and Aer Lingus are jointly responsible for most Irish air travel. They accounted for more than two-thirds of the 35 million who passed through the Republic’s airports in 2019.

Both are operating severely reduced schedules, but hopes had been growing that Covid vaccines would begin reviving air travel this year.

Aer Lingus had been selling summer 2021 flights since the autumn, and reined in plans to cut up to 500 workers in the hope that recovery could begin in coming months.

The airline now expects to carry between 26 million and 30 million passengers in the 12 months to the end of March due to the Covid crisis. This marks the fifth time Ryanair has revised its full-year traffic numbers. It had recently forecast traffic of between 30 million to 35 million passengers.

The carrier said the reduction in flights would not materially affect its net loss for the year as many of them would have been loss-making.

In its previous financial year it carried 148.6 million passengers.

Ryanair said on Thursday that due to newly-announced Covid lockdown restrictions in Ireland, Britain and a number of continental European countries, it expects traffic for January to fall below 1.25 million passengers. It also forecasts that restrictions will likely reduce February and March traffic to as little as 500,000 passengers each month.

The airline said it would “significantly cut” its flight schedules from January 21st, with the result that “few, if any, flights” will operate from the Republic or Britain from the end of January.

All customers affected by these further flight cancellations and travel restrictions will shortly receive emails advising them of their entitlements of free moves and/or refunds.

Ryanair operated 22 per cent of its normal schedule last month with a 73 per cent load factor.

The airline criticised both the Government and the National Public Health Emergency Team (Nphet). It called on both the Irish and British governments to accelerate the slow pace of vaccine rollouts.

“Since Ireland’s third lockdown will not get rid of the Covid virus there is an onus on the Irish Government to accelerate the rollout of vaccines, and the fact that the Danish government, with a similar five million population, has already vaccinated 10 times more citizens than Ireland shows that emergency action is needed to speed Covid vaccinations in Ireland,” a Ryanair spokesman said.