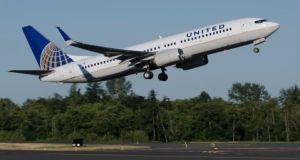 United Airlines has taken delivery of its first 737 MAX 9 aircraft from the Boeing Delivery Centre in Seattle.

More than half a million passengers have connected with Jetblue and Aer Lingus in the United States and in Europe. In 2008, JetBlue and Aer Lingus set about combining their respective networks to create new travel options for guests travelling between the US and Ireland. Five years later the carriers expanded their partnership to a codeshare agreement that allowed guests benefit from one-stop check-in and seamless baggage transfer. US passengers can also use the pre-clearance at Dublin Airport.

When you have time on a flight and good wifi you can amuse yourself by looking at airline safety videos. There are a whole host of videos to watch. Some of them are by Air New Zealand, with references to Lord of the Rings and the All Blacks. Virgin Atlantic’s sexy staff dance through a routine that reminds you of Dirty Dancing. There are also the bitchy air hostesses on Air Africans with their plastic smiles, running down all the passengers.

The news that China is opening up ownership of aircraft to bring more non-Chinese is good for Ireland. As the centre of the world’ s aviation leasing business, it will bring more business to Ireland. As China’s aviation sector expands rapidly to meet surging domestic demand for air travel, Dublin is emerging as a major hub for Beijing’s growing ambitions in the aircraft leasing market.

Eighteen groups from the Chinese mainland and Hong Kong are using the Irish capital as a strategic bridgehead in their push for a bigger share of the $261 billion global market. With about half the world’s leased aircraft managed from Dublin and most leading lessors long present in the city, Ireland is a global aviation finance centre.

Time to bring your own shampoo and toiletries, and do your bit for the environment. If only one hotel cut out providing small shampoo and conditioner bottles, it would divert hundreds of tons of plastics from landfill.

United Airlines has taken delivery of its first 737 MAX 9 aircraft from the Boeing Delivery Centre in Seattle, WA. The new aircraft, which arrived right after Earth Day, reduces fuel use and CO2 emissions significantly compared with older-generation aircraft. In honour of this more eco-friendly aircraft, United has given the MAX a new livery, similar to its fuel-efficient Boeing Dreamliner aircraft, so that employees and customers can easily recognise the plane and its superior fuel efficiency.