Despite U-turn by Dutch state railway, others from Russia to France use Irish entities 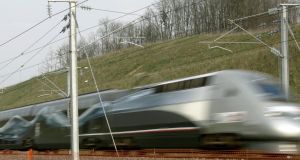 Ireland is a top destination for rail companies from all across Europe to set up financial operations for tax planning. Photograph: Vincent Kessler

Ireland remains a top destination for rail companies from all across Europe to set up financial operations for tax planning despite a recent move by the Dutch national railway to stop using Dublin companies to avoid tax at home.

Netherlands Railways (NS), the Dutch publicly owned train company, is in the process of transferring back to its home country up to €1 billion in profits earned by using tax-efficient Irish companies to own and lease its trains.

The decision by the Dutch company to effectively avoid paying an estimated €270 million in Dutch tax over a decade to its shareholder, the Dutch finance ministry, created a political storm in the Netherlands, which resulted in it effectively being forced to shut down its Irish operation in recent weeks.

However, NS continues to use another Dublin company, Disa Assets, to own trains and avoid tax in Germany, where NS won a train concession in 2016.

Disa is part of Abellio, the overseas arm of NS. The Irish unit expects to take paper delivery of a fleet of new railcars for its German unit later this year. The trains will be financed from Dublin, but will operate in North Rhine Westphalia. In doing so, the company will avoid paying tax at a higher rate in Germany.

But the Dutch are far from the only ones using Dublin as a base for train carriage leasing.

Eversholt, a UK train leasing group that owns close to one-third of the stock of passenger trains operating on the UK rail network, was another company working through Ireland. However, it says it has decided to shift the tax residency of all of its Irish entities from Ireland back to the UK.

Eversholt Investment, a Dublin subsidiary, paid a £20 million dividend to its UK parent in 2015. The company says that its tax residency was shifted back to Britain in December 2016.

“Since December 2015, all leasing income of the group has been subject to UK corporation tax,” it told The Irish Times last night. “The Irish structure was put in place by previous owners and the legacy structure is being unwound as part of an ongoing corporate simplification.”

One of Eversholt’s other Irish entities, European Rail Finance, paid £272 million to its parent in 2014. That unit was valued at £512 million by the parent group. Another Dublin unit, European Rail Finance 2, paid a £95 million dividend to the UK in 2015, after accruing earnings taxed here at a lower rate than they would have been in the group’s home country.

A search of the Companies Registration Office (CRO) records also reveals that Brunswick Rail, the largest railcar leasing company in Russia with 25,000 cars, has financed $600 million worth of its assets through a Dublin unit, Brunswick Rail Finance. The notes were restructured last year, after European Union sanctions hit the Russian economy and negatively affected the rail market.

Touax, a French company that is the second-largest lessor of freight railcars in Europe, owns four different Irish units to hold ownership of at least 5,000 freight cars, worth more than €200 million.

The Irish office of Touax, in Meath, was asked if it used Irish companies to help it avoid tax, but a response was not received prior to publication.

CRO records also show that Ermewa, another French freight car leasing company, has set up two separate Irish units with €300 million of financing to buy trains, although neither entities has yet made any purchases.