Joint venture with Airbus on C-Series aircraft supports 1,000 jobs in the North 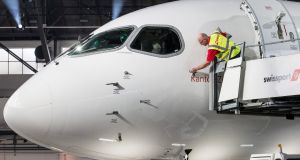 The North’s secretary of state is in contact with both Bombardier and Airbus to ensure that their C-Series joint venture process is “moving swiftly and positively”, the UK government has said.

In new correspondence, published on Friday, the UK government said it hopes that the joint venture process will be concluded later this year once due diligence processes and regulatory approvals are completed.

In January the United States International Trade Commission (ITC) dismissed proposals from the US Department of Commerce to impose what Northern Ireland union leaders had feared would be “job crushing” new tariffs of almost 300 per cent on the sale of every Bombardier’s C-Series aircraft in the US.

The Commerce Department had claimed that Bombardier had benefitted from subsidiaries and had sold the C-Series below cost of production in the US.

Earlier this week the World Trade Organisation (WTO) said it planned to go ahead and investigate similar claims made by the Brazilian government against Bombardier that the Canadian group had received government subsidies which enabled them to sell the C-Series at lower prices.

Following its inquiry into Bombardier the UK house of commons Northern Ireland affairs committee inquiry recommended that the UK government should ensure that the WTO arrived at the same conclusion as the ITC.

But in a new report published by the committee on Friday the UK government states that that the focus of the WTO case being brought by Brazil relates solely to the support Bombardier has received from Canada.

“Support to Bombardier from the UK government is not within scope of the dispute. Should this case be broadened to include the UK then the government will robustly defend its position in the same determined way it has done so in the US dispute,” it stated.