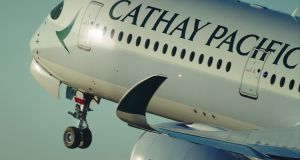 Cathay Pacific is hoping passengers will see Hong Kong as a natural stop-over location for journeys between Ireland and Australia or New Zealand.

Cathay Pacific is “very encouraged” by advance bookings for its planned Dublin-Hong Kong service, according to James Ginns, the airline’s general manager Europe.

Speaking in Dublin on Wednesday, Mr Ginns described advance bookings for the service as “very encouraging”.

“We are seeing good loads of both passengers and cargo,” he said.

Mr Ginns explained that when Cathay launches a route it aims for a mix of business travellers, tourists and cargo, and noted that advance Irish bookings reflected that.

Demand is good both out-bound and in-bound traffic, he added. “The really interesting thing for me has been the level of interest there is from different Asian markets coming into Ireland,” Mr Ginns said.

Business out of Ireland includes passengers connecting on to other destinations in the far east, Australia and New Zealand.

This could put Cathay in competition with gulf carriers such as Emirates, Etihad and Qatar, which already serve this market.

Mr Ginns argued that Hong Kong was the more natural stop-over point transfer passengers as it is roughly half way between Ireland and Australia and New Zealand.

Cargo is mostly pharmaceuticals and fresh produce. As the flights arrive early in the morning, goods can transfer quickly to other destinations in China and elsewhere through Cathay’s network.

The airline will initially fly four times a week, beginning on June 1st from Hong Kong and the following day from Dublin.

Mr Ginns is not ruling out extending the service if demand warrants this. He said that Cathay’s normal policy with a new route was to fly four times a week and expand that if demand materialises.

The carrier launched Tel Aviv-Hong Kong a year ago and now plans to step up frequencies on this route after seeing good traffic.

Dublin-Hong Kong is one of several European services that Cathay will launch this year, along with Copenhagen and Brussels.

Mr Ginns was speaking at the Routes to Growth Asia Pacific conference, which Cathay and State agency Enterprise Ireland hosted jointly at the Aviva Stadium in Dublin, for businesses interested in getting into Asian markets.

Around 450 people attended the event on Wednesday, which Mr Ginns said was “far more” than Cathay expected.

Fuel hedging difficulties and competition left the airline with a $1.26 billion Hong Kong dollar (€131.5 million) loss last year, although its performance improved in the second half.

The deficit was lower than expected, prompting analysts to say that the company was through the worst of difficulties that it experienced over the last two years. Cathay is working on plans to save $4billion Hong Kong dollars.