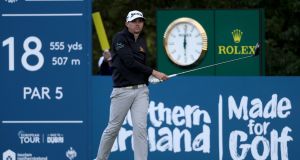 US golfer John Catlin on the 18th on his way to winning the Irish Open at Galgorm Castle Golf Club, Ballymena. The tournament is used annually to showcase Ireland as a golf tourism destination. Photograph: Brian Lawless/PA

The Ireland Golf Tour Operator Association (IGTOA), which represents 16 companies that bring in high-spending golf tourists mainly from the US and Europe, says 2020 revenues have collapsed by about 97 per cent, while 2021 could be down 80 per cent on last year, putting the viability of the entire sector at risk.

The association is calling for cuts to the State’s wage subsidy schemes to be reinstated for the industry. It also argues that the sector needs additional financial support to allow operators to retain staff to shift bookings to 2022, as tourists who have paid deposits begin to lose faith in any chance of travel next year.

“It’s basically a complete wipeout. It’s not just the pandemic, it’s the travel restrictions too. The 14-day quarantine is an unequivocal ‘stay-away’ statement,” said Marty Carr, an IGTOA founder and chief executive of Carr Golf, which normally brings in about 3,000 wealthy American golfers annually.

Fáilte Ireland estimates about 200,000 foreign tourists come to Ireland specifically to play golf each year. They spend about €270 million, with many playing trophy links courses such as the Old Head of Kinsale in Cork, where high-season green fees for 2020 were pegged at €375.

Mr Carr, a member of a well-known Irish golfing dynasty, said his company operates at this premium end of the market, with US visitors spending an average of €5,000 each on dedicated golfing trips.

Trophy courses that target this segment have had to restructure their fee rates, because Irish golfers on staycations will not pay the rates US visitors are prepared to pay, he said.

“I spoke to a leading club this morning, a southwest golf club, indicative of trophy links. Last year they did €2.4 million in green fees revenue, and 50 per cent came from golf tour operators. This year, they’ll do €400,000 in total.”

“We have taken in a lot of deposits from clients who were meant to travel this year, but they’ve transferred to next year. But nobody knows whether it is going to happen or not. So they [tour operators] are already now moving those to 2022. So you have no revenues this year, and next year’s revenues could be 20 per cent [of previous years].”

He said many golf tour operators still have large cost bases, however. Even though they have no revenues, they must retain staff to handle client deposits and rebook business to next year or the year after.

“Covid wage subsidies stemmed the flow of redundancies. The main fear is that a lot of these companies will not be able to fund their operations for the next 18 months. High-end leisure will be the first segment of the market to return. The tour operators need to be there to service them.”