Irish drivers would like to see increased spending on public transport 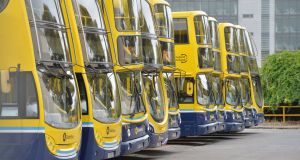 The AA argue that under investment in public transport had left people overly reliant on private cars for far too long. Photograph: Alan Betson

Most drivers favour increased spending on public transport, according to AA Car Insurance.

A survey of 4,000 motorists by the insurer found that 65 per cent believed that increased spending on public transport was “very important” while another one-in-four said it was “somewhat important”.

Fewer than 1 per cent of drivers described the issue as “not at all important” the AA said.

Conor Faughnan, the company’s director of consumer affairs, argued that under investment in public transport had left people overly reliant on private cars for far too long.

He said that this was particularly true of rural Ireland and cities such as Galway and Cork.

“Even Dublin, which has more public transport options than other Irish cities has seen itself fall afoul of poor public transport planning in recent years, as evidenced by the ongoing delays at College Green,” he added.

“If we are to move away from being a car-dependent nation then large-scale investment in alternative forms of transport is needed.”

Mr Faughnan pointed out that the survey exploded the myth of the lazy car owner who thinks themselves too good for public transport.

“ If you have public transport that can deliver people to work on time consistently then no sane person is going to choose sitting in their car on the M50 or in Cork or Galway over a more convenient option,” he said.

Almost 70 per cent of motorists also said that increased spending on cycling facilities was “somewhat important”.