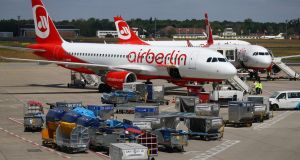 Ryanair has claimed to EU competition regulators that there is a conspiracy between the German government and Lufthansa to carve up insolvent Air Berlin.

The German government loaned Air Berlin €150 million on Tuesday after the loss of shareholder Etihad’s backing forced it to file for insolvency and it emerged that Lufthansa was bidding for parts of its business.

Ryanair complained formally to the European Commission and Germany’s competition regulator, the Bundeskartellampt, that the government and Lufthansa were conspiring to carve up Air Berlin while excluding competitors and ignoring anti-trust and state aid rules.

“This manufactured insolvency is clearly being set up to allow Lufthansa to take over a debt-free Air Berlin, which will be in breach of all known German and EU competition rules,” the Irish airline said.

“Now even the German government is supporting this Lufthansa-led monopoly with €150 million of state aid so that Lufthansa can acquire Air Berlin and drive domestic air fares in Germany even higher than they already are.”

The Irish airline argued that it was important for the European Commission to act immediately and decisively as government involvement meant that the German regulator would be “likely to struggle to get out of bed”.

Ryanair recently complained to the Bundeskartellampt about a deal under which Lufthansa subsidiaries Eurowings and Austrian airlines hired Air Berlin craft and crew to fly routes for them.

The agreement was part of a plan backed by Air Berlin’s biggest shareholder, Gulf carrier Etihad, to restructure the loss-making German airline. The regulator approved it in February.

Cash from the the Abu-Dhabi-based carrier has been keeping Air Berlin afloat. Etihad provided it with €250 million in April but decided to pull further funding following a review of its European investments.

“Air Berlin’s business has deteriorated at an unprecedented pace, preventing it from overcoming its significant challenges and from implementing alternative strategic solutions,” Etihad said in a statement.

News agency Bloomberg estimates that Air Berlin has burnt through almost €2 billion in six years. Speculation over its finances has hit bookings.

The airline said its flights were continuing and the German government confirmed it had loaned it €150 million.

“This bridging loan will be made available via the KfW (state development bank) and backed by a federal guarantee,” said the economy and transport ministries in a joint statement.

The ministries also said they expected a decision from Lufthansa and another airline concerning the sale of parts of the business in coming weeks. Ryanair said that it does not comment on rumour or speculation when asked if it was interested in bidding for any part of Air Berlin.

Shares in Air Berlin closed 36.14 per cent down at 50 cent in Frankfurt on Tuesday. Stock in other airlines, including Ryanair, advanced as investors speculated that they would pick up market share following the German carrier’s collapse.

1 Player Wills site: Hines and APG to seek permission for 416 homes
2 Eir agrees to buy entire share capital of Emerald Tower
3 Developer O’Flynn calls for task force to deal with housing crisis
4 Consumer spending fall may cut indirect tax revenues by up to €6.7bn
5 Pilita Clark: A lot of us are losing it in lockdown – but we really shouldn’t
6 ‘I’ve so many outgoings with family life . . . it puts manners on you’
7 Pricewatch: Coronavirus has given us four categories of shopper
8 Our warped sense of perspective bodes ill for Ireland's economy
9 State guarantee needed for businesses that require liquidity
10 A Smigin of language goes a long way for well-travelled Cork woman
Real news has value SUBSCRIBE