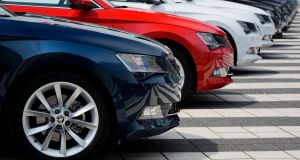 UK auto lenders are increasingly vulnerable to a drop in used-car prices after a surge in risky loans, the Bank of England said. Photograph: iStock

UK auto lenders are increasingly vulnerable to a drop in used-car prices after a surge in risky loans, according to a post published on the Bank of England’s (BOE) staff blog Tuesday.

It’s the latest central bank salvo in a raging debate over whether years of low interest rates have spurred a wave of loans that will lead to rising defaults.

At issue are Personal Contract Purchases, under which drivers make a deposit and rent a new car instead of buying it. Such deals may be susceptible should vehicle values fall significantly and lenders are left with a fleet of low-value automobiles after the contracts expire, the BOE staff said.

So-called PCP contracts may not be subject to prudential regulation in the way that banks are, and automakers and their finance divisions are increasingly stimulating consumer demand by offering these and other forms of cheap car finance, the authors said. PCP contracts now make up 80 per cent of new loans, they noted.

It isn’t the first warning on booming car loans from the BOE. A rise in consumer credit has created a “pocket of risk” that may weaken the financial system if it gets out of hand, executive director Alex Brazier said in a speech last month. He cautioned lenders and the shareholders of automakers on the possibility of a self-reinforcing downward price spiral should PCP purchasers opt to give back their cars as their contracts expire.

However, analysts appear less concerned. While the rate at which vehicles are being returned at the end of PCP contracts is increasing, holders of securities backed by auto loans should be protected, Bank of America said in a recent note to clients.

“We believe UK auto ABS structures provide a high level of protection to ABS investors against these risks,” wrote analysts including Alexander Batchvarov, the bank’s head of international structured finance research in London.