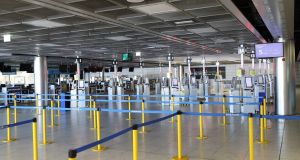 The Irish Aviation Authority (IAA), responsible for air traffic control, said on Friday that it handled fewer than 500,000 flights last year, 670,000 fewer than in 2019. An IAA statement noted that it was the “lowest level of flights in Irish air space since the late 1980s”.

Peter Kearney, chief executive of the regulator, declared that Irish aviation had never experienced a year as bad as 2020.

He added that the industry hoped the recovery would begin later this year as the EU and US vaccinate their citizens.

“While the numbers of flights remain very low in January and for the foreseeable future, we are hopeful of a sustained recovery from quarter three onwards,” Mr Kearny said.

An IAA statement stressed that recovery in the industry cannot begin until governments lift restrictions and there is long-term certainty.

The authority is responsible for guiding flights through the Republic’s airspace and for those taking off and landing at airports. It charges airlines for these services.

Traffic through the Republic’s skies fell further than the European average in 2020 mainly due to a sharp decline in transatlantic traffic after the pandemic struck in the spring.

About 90 per cent of the flights between Europe and North America pass through the State’s air space and through an area over the north Atlantic for which the IAA shares responsibility with its British counterpart, the Civil Aviation Authority.

IAA figures show that the total number of flights the authority’s staff handled last year fell 58 per cent to 498,803. Europe-US flights fell at the same rate to 213,106.

In the Republic, terminal movements at the three State-owned airports, Cork, Dublin and Shannon, fell 58 per cent to 131,508.

The authority noted that traffic through Dublin Airport fell 63 per cent last year.

State company DAA, responsible for the capital’s airport, confirmed in December that it handled 23.5 million fewer passengers in the 11 months to the end of November than during the same period in 2019.

Traffic at Cork Airport, the second biggest in the State, was down 70 per cent, the IAA noted.

Mr Kearney maintained that the IAA ensured there was no loss of safety or quality in its services throughout the pandemic.

“Looking forward, we are planning for a reboot of the industry in line with the European and US rollout of vaccines,” he said.

Government policy left the Republic with the some of the toughest travel restrictions in Europe last year, even during the summer lull in coronavirus infection rates.

Industry figures warn that as a result, the Republic faces serious challenges reinstating services that are key to investment, exports and tourism when the recovery does come.

World air travel, among the industry’s worst hit by the virus, has pinned its recovery hopes on countries vaccinating most of their residents against the virus as quickly as possible.