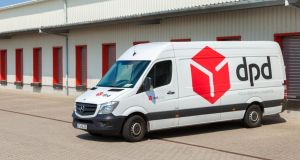 DPD UK has said it is pausing its road delivery services into Europe, including Ireland, until at least Wednesday. Photograph: iStock

Parcel courier DPD UK has said it is pausing its road delivery services into Europe, including Ireland, until at least Wednesday.

It is the latest company to warn that UK prime minister Boris Johnson’s divorce settlement with the European Union (EU) has led to more complex processes at the border.

In a statement on Friday, DPD UK said “it’s been a challenging few days for our international operation and our teams have been working round the clock to process your data for parcels bound for Europe and the Republic of Ireland”.

“It has now become evident that we have an increased burden with the new, more complex processes, and additional customs data we require from you for your parcels destined to Europe. This has placed extra pressure on our turnaround and transit times,” it said.

DPD said that up to 20 per cent of parcels have incorrect or incomplete data attached and they had to be returned to customers “so that the required data can be provided”. The courier said it is also seeing delays and congestion at UK ports and more “rigid requirements” for channel crossings.

“In view of this unprecedented set of circumstances we believe that it is only right to pause and review our road service into Europe, including the Republic of Ireland,” it said.

“We will use this short pause to validate the data we have in our system, reduce the delay and give you the opportunity to give us the correct data we need in order that we can export, from next week, successfully.”

Services are due to recommence on Wednesday, January 13th and the company said it will provide an update prior to this on Tuesday.

An Post has said it is “trading fully and smoothly” with almost all of the UK online retailers for whom it delivers across Ireland.

“An Post has put in place a digital solution for all its UK retailers which simplifies the process and enables seamless despatch and immediate delivery. Ninety-five per cent of An Post’s UK Retailer customers have opted to use this digital system,” it said.

“While some delays should be expected due to UK retailers bedding in their new data requirements prior to shipping, the majority of items despatched through the An Post digital systems are released for immediate delivery on arrival into Ireland.”

An Post said it is helping its UK retailers to “iron out any issues arising for them from Brexit-related changes”.

Seafood exporters said they have been hit by a “perfect storm” of bureaucracy, IT problems and confusion following Brexit.

Marks and Spencer said the new rules and regulations are set to “significantly impact” its overseas ventures in Ireland, the Czech Republic and France.

Hauliers have described being “overwhelmed” by red tape due to new checks on deliveries to Northern Ireland from Britain.