Company to provide funding for home charging kits for its 14,000 taxi drivers 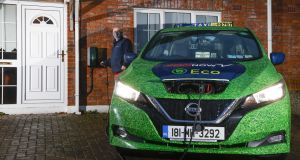 Taxi-hailing company Free Now is to invest €6 million so all of its 14,000 drivers can avail of a home charging kit in a bid to encourage them to switch to electric vehicles over the next one to three years.

With drivers able to save up to €3,000 per year by moving from diesel to electric, it is banking on soon being able to offer zero emission rides to customers if enough drivers make the switch.

The move is part of a €100 million investment by Free Now to have at least 50 per cent of its drivers using electric vehicles by 2025 and to be the first European mobility platform to provide zero emission rides by 2030.

Country manager Niall Carson told The Irish Times the company plans to match grant funding from the Sustainable Energy Authority of Ireland to ensure all drivers can acquire home charging kits for their vehicles. He said the move comes after drivers expressed concerns about the cost of investing in chargers, and in accessing public charging points as an alternative.

According to Free Now, Irish taxi drivers seriously lag colleagues in other European countries in going electric, with 68 per cent of those surveyed unsure about making the switch. This compares to 37 per cent of drivers in Britain and just 22 per cent in France, which both offer greater incentives to move away from diesel and petrol.

Currently, less than 1 per cent of Free Now’s Irish drivers have electric vehicles, with around 17 per cent owning hybrids.

“Things could change quickly in terms of adoption, particularly given the new vehicles coming out that are more efficient and offer greater ranges. But steps need to be taken to encourage more drivers to go electric,” said Mr Carson.

Free Now, which is jointly owned by BMW and Daimler, is urging the Government to invest in more grants for drivers, to update regulations for those wishing to switch to electric vehicles, and to invest in more public charging infrastructure.

“There is a need to look at the regulations to allow more vehicle types. Batteries can take up a lot of boot space for example, and so some of the most affordable and efficient electric vehicles available are precluded from being used on Irish roads by taxi drivers because of this,” said Mr Carson.

Free Now said as part of the new investment, it is also aiming to go carbon neutral by offsetting all emissions, backdated from 2020, through the planting of 20,000 trees across European cities.

The company, which carried more than 20 million passengers locally in 2019, recently announced plans to allow users in Ireland to access shared micro-mobility services such as electric bikes and e-scooters via third parties through its app. It is also considering including access to car sharing services such as GoCar and Yuko on its platform as it looks to expand.