Dark cloud that is Dieselgate has just got darker 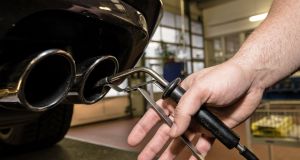 Checking exhaust omissions at a garage in Berlin, Germany. After a happy and profitable co-habitation, Dieselgate has ended the cosy relationship between Germany’s auto industry and politicians

Anyone still doubting the health dangers of nitrogen-dioxide emitted by “clean” diesel engines should take a deep breath after the latest twist in Germany’s Dieselgate disaster.

In the US, 10 monkeys in Albuquerque were put in glass containers and allowed watch cartoons as they breathed in exhaust fumes from a Beetle diesel on a ramp.

In 2013, 25 German volunteers were asked to breathe in various concentrations of nitrogen-dioxide in a test. The exact circumstances are not yet known but a doctor involved in the test said it had nothing to do with the Albuquerque test on monkeys.

All of the German test participants were volunteers, he said, and the test was to investigate the effect of gases in the workplace.

After a long, happy and profitable co-habitation, Dieselgate has seen the cosy relationship between Germany’s auto industry and its politicians take on the air of a sleazy striptease

Armed with their self-financed tests, a representative of Germany’s motor lobby announced that their revolutionary modern diesels were so clean that “in many situations they clean the air, so to speak”.

Five years on, however, someone inside the VW bunker in Wolfsburg now has to explain why they thought it was a good idea for Hitler’s favourite car company to revive live gas tests seven decades after the Nazis used exhaust fumes to murder people they deemed “unworthy of life”.

German politicians, meanwhile, are shocked – shocked! – that the companies could carry out such “disgusting” tests.

After a long, happy and profitable co-habitation, Dieselgate has seen the cosy relationship between Germany’s auto industry and its politicians take on the air of a sleazy striptease.

In the US,Volkswagen has donned multi-billion sackcloth and ashes. Meanwhile, VW boss Matthias Müller refused, at a show summit in Berlin, to compensate European customers.

But the air is getting thin. On Monday, a Munich district court fined the state government over air quality that still contains almost twice as much nitrogen-dioxide as allowed under EU law. Similar cases – and possible inner city bans on diesel vehicles – are looming in Stuttgart and Frankfurt.

Cowed by the car industry’s mix of plámásing and threats, German politicians have turned their citizens into unwilling participants in a long-term study of noxious gases – on city streets.

Slowly the Dieselgate chickens are coming home to roost – if they don’t choke first.