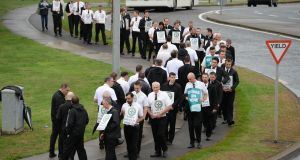 Ryanair is facing strike in five countries on Friday after the airline’s attempt to halt a walkout by Dutch pilots failed. Photograph: Alan Betson / The Irish Times.

Ryanair faces strikes in five countries on Friday after the airline’s last-minute court bid to halt a walkout by Dutch pilots failed.

The Dutch pilots will join colleagues in Ireland, Belgium, Sweden and Germany on the picket lines for a 24-hour stoppage that will result in the carrier cancelling 396 flights out of a total of 2,400.

However, the airline said all flights to and from Holland would operate as normal on Friday despite the strike there, as “Ryanair pilots had decided to work”.

Earlier on Thursday, Ryanair asked Haarlem district court in the Netherlands to order local pilots’ union VNV-Dutch Alpa not to go ahead with the strike.

The airline argued that VNV had not given it sufficient notice of the stoppage, but the court ruled in the union’s favour. “The strike may go ahead,” judge Theo Roell said.

Ryanair maintained afterwards that it respected Dutch pilots’ right to strike, but asked that it be given seven days’ notice to minimise disruption to passengers.

According to a VNV statement, members are striking over issues including sick pay, pensions and self-employment contracts. The union argued that its demands were modest.

VNV-Dutch Alpa announced plans for Friday’s strike late on Wednesday, after pilots in Germany announced details of their 24-hour stoppage.

The Irish, Belgian and Swedish unions notified Ryanair of their intention to strike last week.

Around 67,000 Ryanair passengers, including 42,000 in Germany and the remaining 25,000 in Ireland, Belgium and Sweden, face disruption on Friday as a result of the industrial action in those countries.

“The majority of customers affected have already been re-accommodated on another Ryanair flight,” the airline said.

The company pointed out that over 2,000 of its flights, 85 per cent of its schedule, would operate as normal, carrying almost 400,000 passengers.

Around 100 of Ryanair’s Irish pilots will stage their fifth one-day strike on Friday in a dispute over base transfers, promotions, leave and other issues tied to seniority.

The Irish Airline Pilots’ Association (Ialpa) – part of trade union Fórsa – have accepted former Workplace Relations Commission chairman Kieran Mulvey as an independent mediator in its dispute with Ryanair. Those talks could start next week.

Ryanair cancelled 20 of Friday’s scheduled 300 Irish flights ahead of the strike, but says that it has re-accommodated or refunded the 3,500 passengers affected.

Meanwhile, an official with German pilots’ union Vereinigung Cockpit (VC), challenged reports that the organisation was seeking a 42 per cent pay rise for members.

He explained that only some members, those with long service, would get payrises on this scale; the rest would see more modest increases.

Along with improvements to basic pay, German pilots are seeking bonuses if the airline is profitable, which it has been since the early 1990s.

They also say that they have to pay Irish income tax and German social insurance, both of which are high, and therefore their take-home salaries are below those of competitors.

VC maintains that Ryanair could deal with this by setting up a local subsidiary, a proposal the union says the company has resisted.

Ryanair said this week that German pilots enjoyed good conditions and pay of €190,000 a year. VC argued that only a small number of the airline’s German pilots were on salaries this high.