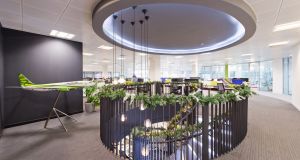 Avolon’s headquarters in Dublin. Orix Corporation agreed to buy 30 per cent of Avolon from Bohai Capital.

Orix Corporation agreed to buy 30 per cent of Avolon through the Japanese group’s Dublin-based aviation subsidiary for $2.2 billion (€1.9 billion) from Bohai Capital, part of China’s HNA group, which itself is cutting a reported $94 billion debt amassed in a global buying spree.

International ratings agencies Fitch and Moody’s, which assess organisations’ ability to repay debt, signalled that they would upgrade Avolon on the back of the deal, which is likely to cut the Irish group’s borrowing charges.

Fitch said its move reflected the “improved credit quality of Avolon’s owners”. Orix’s own debt is A-rated or investment grade, the safest bet for lenders.

Ratings agencies ranked Avolon below this because of its Chinese owner’s troubles, even though the Irish company’s own balance sheet is strong, but are now poised to review it.

Avolon chief executive Dómhnal Slattery confirmed yesterday that this was the objective of bringing in Orix.

He explained that since January, the Irish company had been seeking a large, established, A-rated aircraft lessor, a profile that the buyer fitted. “Orix have been doing this for 40 years,” he said.

Bohai will keep 70 per cent of Avolon, but its parent will use the $2.2 billion to repay debt, something the agencies also see as a positive.

Bohai and Orix will implement a new shareholder agreement which includes “significant protections for the minority shareholder”.

Avolon’s board will comprise of two Orix directors, three Bohai directors, Mr Slattery and one independent once the deal closes in the final three months of this year.

Orix indicated that it hoped to tap Avolon’s access to aircraft manufacturers Boeing and Airbus to help grow its own aviation business. Avolon owned and managed 562 aircraft on June 30th.