Port recorded a 10.9% decline in throughput in the first half of 2019 due to Covid crisis 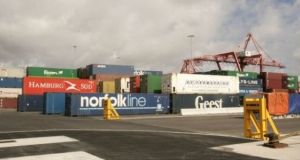 There were no cruise ship calls to Dublin Port in the second quarter and none is anticipated for the remainder of the year.

Dublin Port recorded a 10.9 per cent decline in throughput in the first half of the year although the fall recorded in the second quarter was not as bad as originally feared.

The port’s chief executive Eamonn O’Reilly said that, at this level, the volume of goods travelling through the port for the full year will likely be back at what it was in 2016.

New figures show throughput fell by 17 per cent from April to June as the full impact of the Covid-19 lockdown was felt. This followed a 4.8 per cent decline in the first quarter due to Brexit stockpiling a year earlier.

However, the second quarter decline was less than envisaged with a 26.2 per cent fall in April followed by a smaller drop of 20.5 per cent in May and of just 5.5 per cent last month.

There were no cruise ship calls to the port in the second quarter and none is anticipated for the remainder of the year.