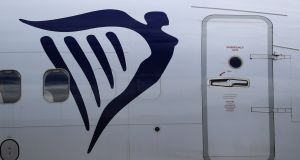 Ryanair said it had been inundated with complaints from customers about unauthorised screen scrapers. Photograph: Reuters

The Irish airline group is refunding fares to customers whose flights were cancelled following widespread travel bans aimed at containing the spread of coronavirus.

Ryanair accused screen-scraper websites, which resell its flights to their customers, of blocking refunds to thousands of passengers by giving fake details to the Irish company or adding clients’ names to “virtual” credit cards.

The airline said it had introduced a new verification process to aid customers whose refunds the company maintained had been blocked by screen scrapers.

Two of the sites named, On the Beach and Loveholidays, said that they refuted Ryanair’s claims.

A Loveholidays spokeswoman said that the company was consistently meeting a commitment to passing all refunds from airlines back to customers within five days.

“However, to date we have received 28 per cent of the total due from the airlines,” she added.

Loveholidays’ spokeswoman acknowledged that some companies in the industry used fake customer details but stressed “we absolutely do not”.

On the Beach’s spokeswoman said the company booked flights as an agent for its customers and maintained that Ryanair had the information it needed to refund cash to clients’ payment cards without delay.

“Despite a requirement for airlines to refund flight monies within seven days, On the Beach has been waiting for refunds for many months,” she said.

Two other sites named by Ryanair, Kiwi. com and Last Minute, did not respond to requests for a comment.

Ryanair said it had been inundated with complaints from customers about unauthorised screen scrapers, which are refusing to deal with passengers. It advised customers to apply for their refunds using the airline’s customer verification process on its website.

The group has pledged to clear 90 per cent of cash due to passengers whose flights were cancelled by Covid-19 travel bans by the end of July.

Eddie Wilson, chief executive of the group’s largest carrier, Ryanair, said it had been unable to deal with “thousands of customers” who had booked through unauthorised screen-scraper websites.