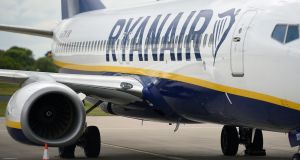 Ryanair sent pilots a memo asking them to accept proposals including a 20% pay cut.

Ryanair has warned it could close bases at Cork and Shannon airports and let go up to 120 pilots after talks with unions on job cuts ended inconclusively.

The airline and the Irish Airline Pilots’ Association (Ialpa), part of trade union Fórsa, reached the end of the legally required 30-day consultation on job cuts on Friday without reaching agreement.

Fórsa/Ialpa then sought an extension of the consultation period but Ryanair accused the union of stalling tactics.

According to reports, Ryanair sent pilots a memo asking them to accept proposals including a 20 per cent pay cut that would be reversed over four years, a spread of available work via job shares and unpaid leave, and increased productivity.

The airline told them that the level of job losses, and whether bases at Cork and Shannon airports remained, would depend on the number of acceptances it received. Ryanair said on Sunday it had nothing to add to the memo.

Fórsa/Ialpa confirmed that the 30-day consultation had ended without the sides reaching a collective agreement.

A spokesman said the union had written to Ryanair to “suggest an extension to work towards and agreement and indicating that we were happy to work with a third party”.

The union told pilots on Friday that the airline’s latest proposal was unacceptable and would leave them effectively working zero-hour contracts with no guarrantee that job losses could be avoided.

Ryanair is seeking 3,000 job cuts, pay reductions and work-practice changes across Europe as it bids to deal with the fallout from more than three months of Covid-19 travel bans that grounded more than 90 per cent of its flights.

The airline is due to restore 40 per cent of its schedule from July 1st, along with other European carriers seeking to rescue part of the traditionally busy summer holiday season.

Ryanair has also warned that it will now be competing against rivals, including Germany’s Lufthansa and French-Dutch group Air France-KLM, that have received billions of euro in government bail outs. The Irish carrier, Europe’s biggest airline, has said this will allow these rivals to sell flights at below cost.

However, unions have pointed to comments by Ryanair management indicating that airlines’ retrenching in the wake of the Covid-19 crisis could trigger expansion opportunities.

Ryanair has also warned that the Republic’s failure to lift travel bans at the same speed as other EU states could deter travel.

The government last week confirmed that it would lift quarantine rules on passengers arriving into the Republic from July 9th.