Ryanair lowers fares and market guidance for next year’s profits 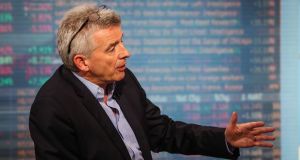 Ryanair passengers are likely to pay an average of around €38 for their flights in coming months as the airline cuts fares in order to ensure that its aircraft stay full.

Between now and March 31st 2018, the end of its current financial year, the Irish carrier will grow its fleet to 427 craft from 380. To fill those planes, Ryanair believes that it will have to cut fares by between 5 per cent and 7 per cent.

On the basis that it charged an average of €41 a-seat in its 2017 financial year, that indicates that customers will be paying an average of between €38.20 and €38.50. Chief executive Michael O’Leary said on Tuesday that Ryanair expected to carry 130 million passengers and grow profits by 8 per cent to between €1.4 billion and €1.45 billion over the 12 months to March 31st 2018.

He cautioned that this was subject to a series of risks, such as terror attacks in European cities and airports, negative developments tied to Brexit and the fact that Ryanair has “zero” view of bookings for the autumn and winter months.

Seat sales for the first half, which ends on September 30th, are up 1 per cent on this time last year, albeit at “softer” prices. O’Leary said that there was limited visibility on peak summer “close-in bookings” – passengers buying tickets within short periods of their flights.

Analysts noted the guidance was at the lower end of what they expected. Stockbroker Investec had thought that Ryanair would pitch 2018 profits at close to €1.49 billion, while the consensus was €1.455 billion.

Ryanair’s guidance implies that its profitability will not fall far behind 2017, when it earned around €10.80 profit per passenger. In 2018, this will dip closer to €10.75, which is still a good return from an average fare of not much more than €38.

The airline says various operational savings would give it the scope to cut fares. Chief among these will be fuel, which will be €70 million cheaper than in 2017 as most of it is already hedged. The company expects to reduce other costs by 1 per cent. “All of those savings will be pushed back to passengers,” its chief commercial officer, David O’Brien said.

Following the Brexit vote, Ryanair pledged to “pivot” growth away from the UK, where it flies between 30 million and 40 million passengers each year. O’Brien says it will still expand to some degree there, but not at the same rate as previously.

Other areas that are likely to deliver a share of the 10 million extra customers that it hopes to attract are Spain, Poland, Germany and Italy, markets where it has either added or expanded bases in recent years. At the same time, it is hoping to cash in opportunities presented as legacy carriers cut back capacity.

O’Leary confirmed that it is in talks with Boeing to buy small numbers of extra craft and will extend leases on 10 planes so it will have the scope to do this. O’Brien says that it may order new craft in “twos and threes” as they become available from Boeing. “When you consider that we will have 427 craft at the year end, in percentage terms it’s not huge,” he added.

It also plans to buy back €600 million shares between this week and October. Once this is complete, Ryanair will have returned €5.4 billion to investors since 2008, either through similar exercises or special dividends.

Analysts point out O’Leary has indicated several times that once the price-earnings yield – the ratio of earnings per share to the share price – goes above 15 times, the company is likely to opt for a special dividend rather than a buyback.