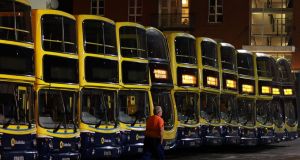 Planner Jarrett Walker stressed that bus coverage in Dublin would not be diminished even if certain routes were discontinued. File photograph: Nick Bradshaw

A redesigned Dublin Bus network will look radically different from the existing system with an overhaul of bus numbers and the possibility of less routes with more changeover options.

In a presentation on Tuesday the lead designer tasked with developing a new bus network for the capital put forward a concept of fewer routes entering and exiting the city centre through a small number of key arterial corridors.

The plan would see commuters in suburban areas accessing these corridors via orbital routes which skirt around the city, or feeder buses coming in from the peripheries of the county and connecting with high-capacity, high-frequency services.

The strategies contained in the Choices Report on Dublin Bus routes follow on from the publication of the Bus Connects programme last week which will see a guaranteed 17 additional bus routes, some with high-frequency Bus Rapid Transit (BRT) services and continuous cycle lanes.

Planner Jarrett Walker explained that there were no specific plans for any existing bus routes as yet, but that the National Transport Authority (NTA) was asking people to say if they would be willing to change over and wait for buses more often as part of a new system.

Mr Walker said this model would constitute a fundamental change from the current network whereby a high number of routes travel into the city centre on overlapping corridors before diverging in opposite directions soon after exiting Dublin’s central business district.

Mr Walker said “nuisance” changeovers would occur more often as part of the alternative model but said journey times would be shortened despite this inconvenience.

Notional examples contained in the Choices Report indicate an achievable reduction in journey time of six minutes between Dunboyne and the city centre even with the introduction of an extra changeover, and a similar reduction between Lucan and UCD.

“A network that requires more interchanging gets more people places sooner and that’s the context in which you need to think, is the hassle of the interchange worth it?” he explained to members of the media.

He added that no additional buses should be required for the redesign, and that the fleet requirement may even go down as some lower frequency or particularly circuitous routes are axed.

Mr Walker stressed that bus coverage would not be diminished even if certain routes were discontinued, saying that anyone being served by an axed route would have access to a different one in its place.

He confirmed that the new design would inevitably look radically different with a planned overhaul of the current numbering system. This is in addition to the provision of new park-and-ride facilities and changed livery for all buses as part of the Bus Connects programme.

NTA chief executive Anne Graham said the redesign of the existing network would rely largely on improvements to Quality Bus Corridors as outlined in the €1 billion Bus Connects programme, thereby negating the need for fare increases for funding.

She said customers would not be penalised with additional fares where they need to change buses as part of the alternative route system put forward.

Mr Walker said the aim of the redesign was to spread capacity more evenly with less packed or empty buses than are currently seen on many routes.

Members of the public are invited to submit their views via a survey on the BusConnects.ie website, which also displays the plans presented today.

The submissions will be reviewed with a view to publishing a detailed proposal towards the latter end of this year, after which the public will be invited to comment further on specific features of the new system such as routes and the placing of bus stops.

Mr Walker confirmed that the preferred method for ushering in changes to the Dublin Bus network once agreed is a “big bang”, “overnight” introduction rather than a gradual switch involving complicated interim timetables.