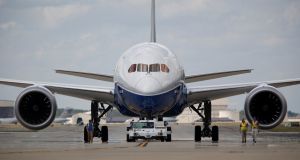 Boeing has delivered 540 Dreamliners to airlines around the world and has orders for 1,213 more. Photograph: Reuters

The company is extending hangars at its Shannon base to allow it to maintain and repair large wide-body aircraft such as the Dreamliner.

From the autumn, Lufthansa will modify, repair and refurbish Boeing 737 cabins and interiors, paint the inside and outside of the craft and carry out other work such as compliance checks at the Co Clare facility.

While the company did not give an exact figure for the investment involved, it is understood to be between €2 million and €3 million. It also hopes that the extra work will result in it hiring more staff to add to its 485 workers.

Staff are getting specialist training for the work. The 787, which is 68m long with a 60m wingspan, is one of the better known of the new generation of long-haul aircraft launched in recent years. Boeing has delivered 540 of them to airlines around the world has orders for 1,213 more.

He pointed out that the Republic has an excellent reputation aircraft maintenance and added that “with B787 capabilities, we have extended and grown our customer offering.”