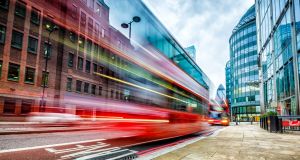 Go-Ahead’s London bus business has failed to retain some contracts in the face of increased competition. Photograph: iStock

Go-Ahead Group, the company recently awarded a contract to run around 10 per cent of Dublin Bus routes, aims to make 15-20 per cent of its profit abroad within five years, it said on Thursday, as it forecast further challenges in the UK where its Southern rail business has been hit by strikes.

The company said slowing growth in passenger revenues at its rail business in southeast England was set to continue amid a squeeze on consumer incomes, cutting its profitability expectations for its rail division in its new financial year.

For the year ended July 1st, group operating profit fell by 7.4 per cent drop to £150.6 million ($196 million), hit by the strikes and one-off costs at its bus business.

Go-Ahead’s London bus business has failed to retain some contracts in the face of increased competition.

In August, the company also failed in a bid to retain its West Midlands rail franchise after running the network in central England for 10 years.

It said on Thursday that international contracts would help to offset some of the impact.

“While it was disappointing to be unsuccessful in our bid to retain London Midland, progress in our international strategy will see some of the lost revenue from the franchise replaced with contracts in the targeted markets of Singapore bus, Dublin bus and German rail,” chief executive David Brown said in a statement.

Go-Ahead had previously not disclosed a formal international expansion target.

But he cut his share target price to 2,050 pence from 2,250 pence, citing a larger than expected slowdown in the company’s southeast rail business.

The company said its results were in line with expectations, having already lowered its full-year profit forecast in February to reflect the impact of strikes on Southern railways.

1 Fianna Fáil may have just pressed the pause button on the property market
2 UK to prioritise EU trade deal over one with United States
3 Who are Ireland’s 17 billionaires?
4 Dunnes premature in challenging Point Village resolution move, Supreme Court finds
5 Saudi prince’s WhatsApp account ‘directly involved’ in Bezos hack
6 My father in a nursing home wants to gift me his house
7 Are there annual limits on inheritances or gifts to a child?
8 European investor acquires Harcourt Road offices for €55m
9 Corporate tax change is inevitable, says Donohoe
10 Belfast regeneration project worth £500m gets green light
Real news has value SUBSCRIBE