Planes would come with their pilots, cabin crew and fly existing routes 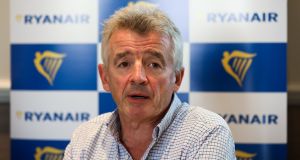 Ryanair will bid to operate 90 planes under the Alitalia brand and using existing staff as part of the Italian airline’s restructuring, chief executive Michael O’Leary said on Thursday.

Ryanair has until October 2nd to make a binding bid for all or part of the Italian carrier, which has been put under special administration for the second time in less than a decade.

“We will be submitting an offer for the 90 jet aircraft, with their pilots, cabin crew, routes etc,” Mr O’Leary told journalists at a press briefing in London.

Ryanair would operate the 90 leased planes using existing staff, but the offer would be dependent on some redundancies, changes to staff conditions and renegotiation of the leases, he said.

As Ryanair exclusively uses Boeing planes, Alitalia staff would be required to maintain the 90 Airbus planes, he said. Ryanair, which only currently operates short-haul routes, would also take on long-haul routes under the deal, O’Leary said.

“I think one of the aspects of Alitalia that is really attractive is the long-haul fleet. There is the capacity to grow very strongly,” he said.

Ryanair would be interested in bidding for the whole of Alitalia, which has about 120 planes, but such a deal would likely be blocked by regulators as it would leave Ryanair in control of over 50 per cent of the Italian market, O’Leary said.

“We’d be very willing to buy Alitalia. But I suspect ... given we’re the number one airline in Italy we’d be blocked under EU competition rules,” he said.

Ryanair is one of around 10 parties that has expressed an interest in a bid for all or part of the carrier.

O’Leary said Alitalia would likely be broken up whoever buys it and that any takeover would include competition remedies.

1 Why Irish banks are now looking beyond vulture funds on problem loans
2 Corona beer firm reeling after 8% slide due to coronavirus
3 Pharma giant AbbVie warned Government against ‘unfair’ €572m tax bill
4 We have little chance of building enough homes to meet election promises
5 Claims of intra-family espionage emerge in billionaire Barclay family feud
6 Life as a Facebook moderator: ‘People are awful. This is what my job has taught me’
7 Coronavirus: Stocks fall again in worst week since 2008 crisis
8 How well paid do you think you are? Here’s how to work it out
9 ‘The only time apartments were viable was in . . . Ballsbridge, Killiney and Dalkey’
10 Blame for NZ budget leak down to failings at unit led by Makhlouf, report says
Real news has value SUBSCRIBE