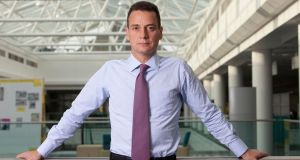 Dalton Philips, the former chief executive of the British supermarket chain Morrisons, and the Brown Thomas group, has been named as the new head of DAA, the former Dublin Airport Authority.

The news came on the same day as Cathay Pacific confirmed it will operate a flight from Dublin to Hong Kong from June 2nd, 2018. The route will operate on Mondays, Wednesdays, Thursdays and Saturdays.

Mr Philips, who succeeds Kevin Toland who was recently confirmed as the new chief executive of listed Swiss-Irish food group Aryzta, will take up the role in early October. He has been appointed for a seven-year term.

Between 2010 and 2015, he led Morrisons, the fourth largest supermarket chain in the UK.

He is also a senior adviser with the Boston Consulting Group and was last year announced as a non-executive director of One51.

“I’m delighted to take up this role after a long career abroad and am looking forward to working with DAA’s strong and ambitious team as well as all the key stakeholders,” Mr Philips, who grew up in Co Wicklow, said. “Our focus will continue to be on providing the best customer experience for the millions of passengers who travel through our airports every year.”

Minister for Transport Shane Ross welcomed the appointment and said the delivery of a second runway at Dublin Airport would be a priority for him.

“In 2016 Dublin was the fastest growing major airport in Europe as its passenger traffic increased by more than 11 per cent to 28 million,” Mr Ross said. “Growth of this magnitude has implications for the infrastructure at the airport, in particular delivery of a second parallel runway. This will be a priority for the new CEO, as ensuring the provision of adequate capacity at Dublin Airport will be a key enabler for Irish economic growth for decades to come and is an essential element of national infrastructure.”

Cathay Pacific will operate its service with an Airbus A350-900 aircraft in a three-class configuration. The Dublin flight will arrive in Hong Kong early in the morning local time, providing a range of connecting options to mainland China, Japan, Korea, South-East Asia and Australia on the Cathay Pacific and Cathay Dragon networks.

Trade between the Republic and China is worth more than €8 billion per annum and almost 100 Irish firms have operations in China, employing a total of 100,000 people there.

About 40,000 people per year currently travel between Dublin and Hong Kong, but this is expected to grow with the opening of the new direct service. An estimated 4,000 Irish people live in Hong Kong, according to the Irish Embassy in China.