Petrol prices to rise 3c a litre due to Hurricane Harvey 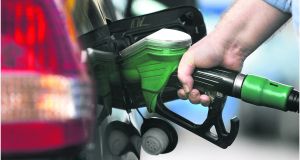 The Irish Petrol Retailers Association (IPRA) said its members would be hit with increases from Saturday. Photograph: Dara Mac Dónaill

Retailers are expected to increase the price of a litre of unleaded petrol by around 3c from this weekend, a decision they say is a result of disruption to oil supplies caused by Hurricane Harvey in the south of the US.

Flood waters have knocked a number of refineries off-line across Texas and other parts of the US’s prime oil producing region, leading to a spike in the price of Brent and American crude oil.

The Irish Petrol Retailers Association (IPRA) said its members would be hit with increases from suppliers from Saturday, and this would swiftly filter through to the pumps through a rise in the order of 3c a litre.

The price hike will mean the owner of a car with a typical 50-litre tank can expect to pay an extra €1.50 to €2 for each full refill as the average price per litre moves towards the €1.30 mark.

The association said further increases could not be ruled out but that it did not expect further big fluctuations in the price of petrol beyond the next few days.

The affected US refineries are working to get back on-line following the damage caused by Hurricane Harvey, which dumped 25 trillion gallons of water on US states along the Gulf Coast.

Two major fuel pipelines in the US were restricted or stopped because of the flooding, and motorists in Dallas had to queue to fill up their vehicles as some petrol stations ran dry.

In the UK, the RAC motoring company says it expects the price of unleaded to peak above diesel for the first time in a year. “This will be the first time unleaded has been higher than diesel since June 2016,” a spokesman said.

“We expect this to be the case for some time to come, or at least until the US oil industry is able to get refineries back into operation and production in the Gulf Coast returns to normal to meet the United States’ immense appetite for gasoline.

“One quarter of the refining capacity in the States remains offline, leaving a shortfall of over four million barrels a day,” he added.