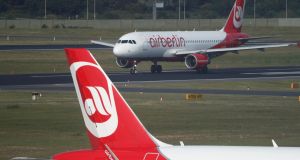 The European Commission on Monday approved a German bridging loan for Air Berlin that will keep the insolvent airline operational while it tries to find buyers for its assets.

The government pledged a €150 million loan to prevent Air Berlin’s aircraft from immediately being grounded, which would have stranded holidaymakers abroad and put about 8,000 jobs at risk only weeks before a national election.

“The measure will allow for the orderly wind-down of the insolvent airline Air Berlin without unduly distorting competition,” the commission said in a statement on Monday.

The money will last at most until mid-November, which means the pressure is on to agree a carve-up of Air Berlin, whose assets include about 140 leased aircraft and valuable take-off and landing slots in Germany.

HSBC analysts said they expected Ryanair, which has said it is not bidding for Air Berlin assets, to also expand its capacity in Germany after the carrier is split up.

British Airways owner IAG may snap up any A320 or A330 aircraft left over at low lease prices following the carve-up, the analysts added.

A few other investors have expressed interest in parts or all of Air Berlin, though they are seen less likely to prevail.

Businessman Alexander Skora on Monday proposed returning Air Berlin to its roots as a holiday carrier serving destinations such as Majorca.

Skora, who has so far invested mainly in real estate and startups, told Reuters he was looking at the carrier’s books and would then decide whether to submit a formal bid jointly with a consortium of unidentified investors from Israel, Canada and the United States.

German aviation investor Hans Rudolf Woehrl had expressed interest in Air Berlin as a whole but has stepped back from the process to search for a partner.

Utz Claassen, a former chief executive of German utility EnBW, is reportedly also interested but declined to confirm that in an interview with daily Handelsblatt.

The premier of the German state of North Rhine-Westphalia, where Air Berlin flies from airports including Dusseldorf, said safeguarding jobs should play a major role in negotiations.

“Our goal is that we don’t talk just about aircraft and slots but also about the staff and the people,” Armin Laschet said following a meeting with Air Berlin labour bosses and Berlin mayor Michael Mueller.

The deadline for offers is September 15th, and a decision could come on September 21st, three days before the national election.