DAA claims it cannot pay for a planned €2bn expansion to the airport if the charges are cut to €7.87 a passenger 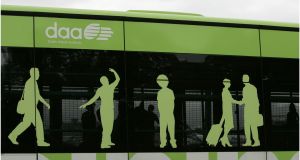 Dublin Airport owner DAA is challenging a ruling by regulators to cut passenger charges to €7.87 a head from next year.

The Commission for Aviation Regulation (CAR), which sets the fees Dublin Airport charges airlines for passengers, ruled in October that DAA should cut the levy to an average of €7.87 a passenger over the five years to 2024.

State-owned DAA confirmed on Friday that it has appealed the ruling. The company said it had this week asked Minister for Transport, Tourism and Sport Shane Ross to appoint an appeal panel to consider its challenge.

“The regulator’s decision contained material flaws in relation to issues such as passenger forecasts and elements of capital spending which were disallowed,” a DAA statement said.

The law governing the setting of Dublin Airport’s charges allows DAA to appeal the commission’s ruling to a panel appointed by the Minister. The findings of the panel go to CAR, which can ultimately decide to accept or reject the outcome.

The appeal could take several months. CAR’s Cathy Mannion said in October that the new charges would apply while any challenge was under way, so the fees charged to airlines will fall next month in line with the commission’s ruling.

DAA maintains that it cannot pay for a planned €2 billion expansion of Dublin Airport, needed to allow it handle up to 40 million passengers a year by 2030, if the charges are cut to €7.87.

It had wanted to be allowed keep the charges at €9.65 a head, the maximum it was allowed charge in 2018, over the next five years to allow it raise the cash needed for the work.

The company maintained that airlines supported this when DAA put it to them last year. However, both Aer Lingus and Ryanair, its biggest customers, subsequently said that the levy should be cut.

DAA chief executive Dalton Philips described CAR’s decision in October as “a disaster for passengers and for the Irish economy”.

On Friday, the airport owner said it would “continue to reassess” its planned capital programme while the appeal process runs its course.

“The construction of the new north runway, which had its official sod-turning last February, will continue throughout next year, and a number of other upgrades and improvement projects – that were approved within previous capital programmes – will be proceeding.”

The company will shortly go to tender for an external delivery partner to help manage the overall programme of works at the airport over the next five to seven years.

DAA has a mandate to expand the airport in line with Government policy to boost the Irish economy.

Passenger numbers were forecast by CAR in its ruling to grow 3 per cent per year over the next five years. However, DAA pointed to a 3 per cent drop in its winter season capacity at Dublin from October 2019 and March 2020.

In November, Dublin Airport recorded a 1 per cent drop in passengers compared to November 2018, the first such monthly drop since March 2014.