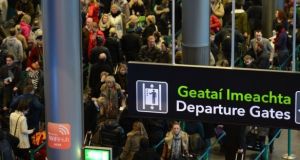 A Government-commissioned report last year found there was no reason to delay building a third terminal at Dublin airport.

Dublin Airport does not need a third terminal according to Willie Walsh, chief executive of the group that owns Aer Lingus and British Airways.

A Government-commissioned report last year found there was no reason to delay building a third terminal at the Republic’s biggest airport, which handled 31.5 million passengers last year.

Speaking at an Aviation Club UK dinner hosted in Dublin, Mr Walsh, chief executive of Aer Lingus parent, International Consolidated Airlines’ Group (IAG), said the business was “not interested” in a third terminal at the airport.

“We are not going to get sidetracked by a debate around should there be a third terminal at Dublin,” he told the gathering.

Mr Walsh added that building another terminal at the airport “just did not make sense”.

He also dismissed reports that he had recently met aviation entrepreneur, Ulick McEvaddy, to discuss plans for a third terminal that would host Aer Lingus and US carrier Delta.

Along with Aer Lingus, which is one of Dublin’s biggest airline customers , IAG subsidiaries, British Airways and Spanish carriers Iberia and Vueling, also fly from the airport.

DAA chief executive, Dalton Philips, has pledged to add the new gates and aircraft stands without seeking an increase to the passenger charges paid by airlines to the airport.

Mr Philips has also said that the DAA’s plans meet airlines’ needs, so there is no necessity for a third terminal at the gateway.

Mr Ross wanted the consultants to explore the possibility of getting a private-sector operator to run a third terminal in competition with DAA.

Mr Walsh also said that he believed there was no post-Brexit risk to flights between the UK and EU.

Questions over whether the UK would still be covered by EU air travel treaties once it leaves the bloc on March 29th have prompted fears that flights could be grounded temporarily.

However, Mr Walsh argued that it was in no-one’s interest to allow this to happen. “I don’t see there being a problem,” he said.