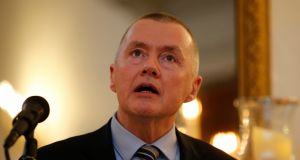 Irish carrier Aer Lingus is the most profitable in a group that includes British Airways and Spain’s Iberia.

He told the Aviation Club UK dinner in Dublin on Sunday that Aer Lingus was the “most profitable” in the group.

Mr Walsh, a former chief executive of Aer Lingus, warned that some airlines could fail this year.

“We’ll see some of these airlines disappear,” he said, referring to turbulence that had hit the sector in recent months.

However, he said that Norwegian Air International which plans to cut its Dublin base as part of a series of measures designed to save €200 million this year, was unlikely to be one of them.

IAG owns a 4.6 per cent stake in Norwegian, but Mr Walsh dismissed speculation that it would get sucked into a bidding war for the troubled carrier.

“I have been very clear that if we do not progress to a full takeover, then we have not interest in retaining it,” he said of IAG’s shares in Norwegian. “We are not going to get into a bidding war.”

Mr Walsh said that he “liked” what Norwegian had done, but questioned whether the Boeing 787 craft that it uses was the right one.

Norwegian, which has an Irish airline licence, has been offering low-cost flights from Europe to North America, including services from the Republic to the US.

However, the carrier ran into trouble this year as costs such as fuel rose and competition in the European air travel market intensified. It plans to reduce the number of craft flying from its Dublin base next September with the potential loss of 150 jobs as part of its cost-cutting plan.