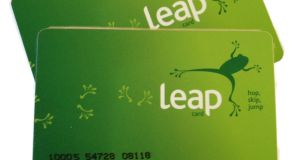 Irish language commissioner Rónán Ó Domhnaill says his office has received similar complaints over the years, noting that the fada in a person’s name was an “integral part of that name”

A State agency has been criticised by a variety of public figures, language activists and a Minister for its refusal to properly spell Irish names on public transport passes.

The National Transport Authority (NTA) is blaming “technical limitations” for not including the fada on names of commuters using Leap cards.

Broadcaster Bláthnaid Ní Chofaigh described the explanation as “rubbish”, saying “if you respect that person, then you have to respect their name”.

Liam Ó Maonlaí, of the Hothouse Flowers, said “pretty much all printing technology has the capacity to print fadas – there is no excuse”.

Documents released under freedom of information show Minister for Transport Shane Ross recently complained to the NTA, which is answerable to him, that the son of one of his constituents wanted his name spelt properly on his Leap card.

She said it was “something we would hope to address at a suitable opportunity in the future”.

While State agencies are obliged to provide services in Irish, there is no provision in legislation on the use of the síneadh fada in a person’s name.

Minister of State for the Irish language Seán Kyne said he was “surprised” at the NTA and pointed out the obligation on all State organisations to provide services in both Irish and English. “This includes the National Transport Authority.”

Mr Kyne said he would be expecting the State agency to “rectify such ‘technical difficulties’ as a priority”.