Dublin Airport seeks contractors for €1bn worth of work 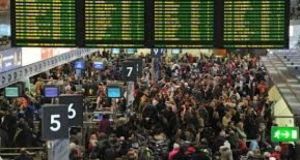 Dublin Airport confirmed that it handled a record 31.5 million passengers last year, 6 per cent more than in 2017.

Dublin Airport has begun seeking contractors for about €1 billion worth of work due to be completed in the early years of the next decade.

State company, DAA, the airport’s owner, will spend €900 million adding new passenger gates and aircraft stands to both its terminals which it hopes will be ready in 2024.

The company has issued a notice on the Government’s e-tenders site to inform potential bidders for the work and to help it identify businesses with the scale and experience required.

It states that the combined value of the projects “will exceed €1 billion”. Along with adding the extra gates and stands, DAA wants to complete about €150 million worth of work on its airfield and €50 million in terminals one and two.

Dublin Airport intends to hold briefing sessions for potential candidates in Dublin, London, Paris and Madrid later this month and in early February, including one for members of builders’ representative body, the Construction Industry Federation.

DAA began consulting airlines and other airport users on these spending plans in October. At the time, the State company’s chief executive, Dalton Philips, explained that the projects were designed to deal with issues created by eight years of growth at Dublin Airport while positioning it for the future.

“This plan has been designed to meet the needs of our airline customers, allowing them to continue to grow their business at Dublin Airport, which will boost tourism, trade and foreign direct investment throughout Ireland, ” he said.

DAA plans to spend €500 million on new stands and piers at the southern side of Dublin Airport and €400 million doing the same at the northern end. The investment is separate to the estimated €320 million it is spending on a new runway.

Mr Philips has pledged that it will do the work on the piers and stands without increasing the passenger charges paid by airlines that use the airport.

Dublin Airport this week confirmed that it handled a record 31.5 million passengers last year, 6 per cent more than in 2017. The increase puts it firmly in the top tier of European airports, that is, those with 25 million or more passengers a year.