James Hogan to step down as CEO at Etihad 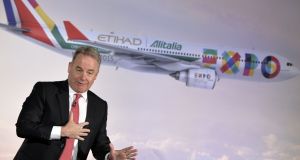 Australian James Hogan president and CEO of Etihad Aviation Group will step down in the second half of 2017. Photograph: Andreas Solaro/AFP/Getty Images)

The veteran chief executive of Abu Dhabi’s Etihad Aviation, which owns one of the Middle East’s top airlines, will leave this year, but the carrier remains committed to a system of equity alliances that he developed, Etihad said on Tuesday.

Australian James Hogan, 60, who over the past 10 years built Etihad into an aggressive competitor to Dubai’s Emirates and Qatar Airways, will step down as president and chief executive of the group in the second half of 2017. Chief financial officer James Rigney will also leave this year,

Etihad’s chairman, Mohamed Mubarak Fadhel al-Mazrouei, said Etihad was continuing a “company-wide strategic review” which could include adjustments to the network of equity partnerships with other carriers that Hogan used to engineer rapid growth at Etihad.

“We must ensure that the airline is the right size and the right shape. We must continue to improve cost efficiency, productivity and revenue. We must progress and adjust our airline equity partnerships even as we remain committed to the strategy,” he said.

However, an Etihad spokesman told Reuters there was no link between the review and Hogan’s departure, which had been planned for many months.

Etihad owns stakes in seven airlines around the world: Air Berlin, Alitalia, Air Serbia, Air Seychelles, Etihad Regional, India’s Jet Airways and Virgin Australia. In 10 years, Etihad grew from a 22-plane regional carrier into a global operation with 120 aircraft. But in recent months, a slowing regional economy, overcapacity in the industry and a strong US dollar have pressured its earnings. Company and industry sources told Reuters in December that Etihad was reviewing its policy of investing in European airlines after continued losses at Air Berlin and Alitalia. That month, Etihad said it was cutting jobs in some parts of its business, but did not give a number.

On Tuesday, Etihad said it had started a global search for a new group chief executive and a new chief financial officer. It said it was grateful to Hogan and that he and Rigney would join an investment company, which it did not name.

Stocktake: Active fund managers fail to earn their keep 05:40
Working from home: New costs, new stresses and little relief 05:32
Stocktake: History says this is not a bear market rally 05:30
Joint accounts: if one of us dies, can the other access the money? 05:30
Covid-19 has turned the volume up on musicians’ cut from streaming 05:27

1 HSBC board rethinks overhaul and seeks even deeper cuts
2 Working from home: New costs, new stresses and little relief
3 Eason to lay off 150 staff as it prepares for June reopening
4 Lucinda Creighton’s consultancy agrees partnership with US lobbyist
5 ESB shelves plan for €500m electricity generator at Poolbeg
6 Will remote working mean an end for the corporate HQ?
7 Reopening economy does not cause coronavirus spike – researchers
8 Covid-19 has turned the volume up on musicians’ cut from streaming
9 Joint accounts: if one of us dies, can the other access the money?
10 ‘Over 1,000’ pubs have interest in Covid-19 insurance test case
Real news has value SUBSCRIBE