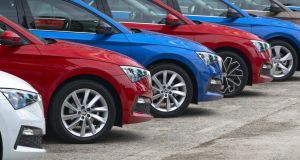 The decline in new car sales moderated in June, a typically quieter month as consumers anticipated the new registration period which began on Wednesday.

New car sales fell 28 per cent to 1,011 compared to the same month last year and are down almost 35 per cent so far this year, according to data from the Society of the Irish Motor Industry (Simi).

“Clearly 2020 has been a very difficult year to date, with new car registrations down 34.5 per cent year on year. The new 202-registration period commences today, which brings some hope for the industry by providing an opportunity to increase sales,” said Simi director general Brian Cooke.

“While pre-orders and enquiries are showing some positive signs, the lack of car hire and the ongoing concerns surrounding Covid-19 will see continuing downward pressure on new car demand,” he added.

Sales of new diesel cars are 39 per cent lower than last year for the year to date, although with 23,340 diesel cars sold, this fuel type remains the most popular. Sales of fully electric cars have taken the smallest his so far this year at 3 per cent with 1,891 cars sold. Meanwhile, sales of petrol plug-in hybrid vehicles have grown by 39 per cent, with 1,164 cars so ld so far this year.

Toyota remains the best-selling car brand in the Republic, with 6,470 registrations so far this year. It has also managed to increase its market share to 12.23 per cent. It is followed by Volkswagen on 6,225, Hyundai on 5,223 and Skoda with 4,594. Ford is in fifth place with 3,629 cars registered so far this year.

Premium brands Porsche and Tesla are the only companies to have seen growth in the year to date compared to the same six months last year. Tesla has sold 423 vehicles so far this year, up from 46 in the same period last year, while Porsche has seen growth of 42 per cent, representing a total of 57 vehicles registered so far this year.

Meanwhile, the best-selling model remains the Toyota Corolla, with 2,497 registrations, ahead of the Hyundai Tucson with 1,997, and the Volkswagen Tiguan with 1,793.

Heavy goods vehicles sales are down 32 per cent to 1,224 so far this year.