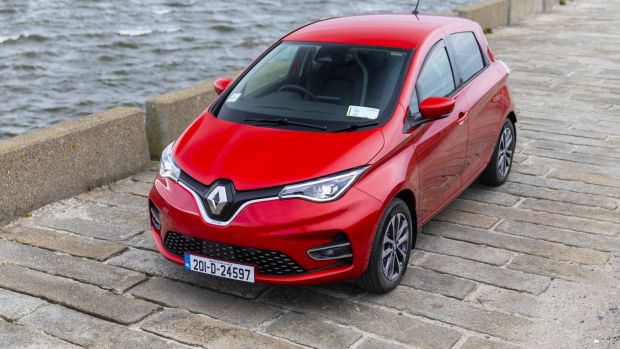 Renault Zoe Z.E.50 R135 GT Line: within sight of being a class leading four-star car, thanks to a mix of usable range, competitive price and practical, smart cabin

When it comes to electric cars, I’m going through a Goldilocks moment. One’s too expensive. The other’s got too low a range. That one handles like a shopping trolley with a stuck wheel.

As I await the one that’s just right, Renault has come up with a car that comes closest to getting the balance right. The French car maker has been on a bit of a roll of late. The new Clio is a serious step up from what went before, and the addition of a new hybrid version should see it become a serious seller to an Irish audience eager to embrace a little electric driving in their lives, while also offering a quality interior, comfort and safety.

The decision to keep the fully-electric variant as an independent model was, perhaps, a marketing one, led by the fact the Zoe had established Renault as one of the early evangelists of fully electric power, alongside sister brand Nissan.

My fears were that the latest Zoe would be merely an exercise is recouping costs: fit the latest battery (up from 40kWh to 52kWh) and then trim every other excess from the car in order to try and make back those exorbitant research and development costs. Thankfully, I was wrong.

This new Zoe is a cracking little car, good looking, full of the addictive electric pace and decent practical space. Two adults can sit comfortably on the rear bend cheat, though family members disagreed with me on whether they’d find a cross-country trip all that easy in the back. However, a Covid lockdown shopping expedition to Homebase was completed and the Zoe swallowed a surprisingly bulky load of garden furniture when the rear seats were folded down.

The cabin quality has also been noticeably improved, bringing it in line with the new Clio courtesy of a smart touchscreen control system and – in the higher level versions – smart new tactile material surfaces. There’s no sign of corners being cut to cover the cost of the bigger battery.

I am truly smitten by the acceleration and torque of electric cars these days; so much in fact that getting back into a diesel, even a premium German version, was such a disappointment. All that noise, rattle and roar to sluggishly attempt to replicate what electric cars do with silence and grace – and at twice the pace. A 0-100km/h time of 9.5 seconds belies the true acceleration of this car, which manages to get from 0-50km/h in just 3.6 seconds. True, at higher speeds electric cars like the Zoe quickly lose their edge, particularly as they approach their limited top speeds, but that’s an engineered limit to preserve battery charge. Which, of course, leads us to the range debate.

The Zoe claims a range of up to 395km for the R110 version or 386km for the R135 (the 110 and 135 referring to the two sizes of electric motor available, the latter being the new more powerful motor) thanks to a 52kWh battery pack. Those estimates are rarely achieved outside test facilities, but the Zoe can deliver upwards of 250km or more from a full charge, and that’s impressive, and better than most of its rivals. It means that, unlike a lot of electric cars, this one isn’t confined to suburban commutes.

There is a button to change driving modes, but it is best avoided as eco mode kills off the throttle response to such an extent you end up stomping it into the floor just to overtake a cyclist.

There’s a “B” mode in the transmission that increases the power regeneration to the battery. It’s the same set-up that’s in many hybrids but it also means the Zoe can be driven as a one-pedal car: lift off the accelerator and it noticeably slows.

The Zoe’s range puts it up there with the likes of the Tesla’s in terms of driving distance, yet at a lower price. Starting at €26,990 after grants for the 110 version, but you need to spend €31,990 for the R135. Despite the extra spend, the 135 is the one to opt for, even if it forsakes a little mileage.

Now that’s not cheap, particularly when you consider that the Zoe’s sibling is the Renault Clio, starting at €17,195. But in comparison to other electric rivals, it’s not bad at all, and throw in the impressive range, the practical space – for a supermini – and suddenly the Zoe seems to be the best of the bunch on the market right now.

Yet the Zoe is not without flaws. Build quality remains a Renault bugbear. It’s a lazy motoring trope to complain about French build quality. And Renault has proved that it is well able to build quality cars, most recently with the phenomenally entertaining Alpine (sadly never introduced to Ireland) and the latest Clio, a really impressive supermini. Yet as I was truly falling for the Zoe and penning it as a four-star car in this review, it started to rain on the Renault’s parade.

A summer downpour saw the rather lightweight wipers struggle to cope but the worst sin was that intermittent droplets of water started to fall from the driver’s door seal onto the dash. And it wasn’t residual rain water from when I got into the car: the Zoe was dry when I sat in at the indoor car park.

Don’t get me wrong, it wasn’t a deluge: three or four drops over 30 minutes. And it only takes a microscopic gap for water to seep into a door sill and then build up into droplets, as anyone with leaky roof windows will attest. But it undermined my growing admiration for this car, and willingness to see how €30,000 for a supermini wasn’t such a mad price after all.

This latest generation of Zoe is a major improvement in all areas on its predecessor, which had a free run at the small electric market for several years. That’s important, for there is a fleet of new electric rivals landing on our shores right now. The new Opel Corsa-e and its twin, the Peugeot 208-e, are arguably its closest rivals, in terms of price and range.

Then there are premium rivals like the new Mini electric and the upcoming Honda e, but their ranges make them really only urban commuters.

Yet Renault has responded to these challengers with a car that boasts a really strong battery range, which makes it a practical buy for many more rural town buyers, while also noticeably improving the cabin quality. So long as the rain doesn’t get in.

Verdict: It’s within sight of being a class leading four-star car, thanks to a mix of usable range, competitive price and practical, smart cabin