Nikola Motor takes a big-money punt on the hydrogen future

Founder Trevor Milton: ‘For my generation, revenue is not everything’ 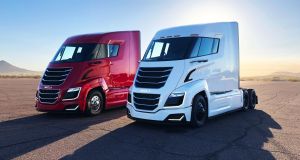 “Cars is a money-losing market and that’s why you see our competitors coming into semi trucks now.”

Another week, another rocketship rise in value for a newly founded car maker. Previously, it was Tesla outstripping the market values of car manufacturers with a century’s heritage. Now it’s the turn of Nikola Motor Company, a brand that takes its name from the same source as Tesla and has similar designs on changing the future of transport.

Similar but different. While Tesla started by making saloons and SUVs, and has only recently moved towards making hard-working vehicles such as pick-up trucks and lorries, Trevor Milton, Nikola founder and executive chairman, says trucks are the only way to go.

“We’re not getting into cars, cars is a money-losing market and that’s why you see our competitors coming into semi trucks now, because they have a hard time making money. There is no money in car making, even the biggest groups in the world lose money on it. It’s a 50-50 shot to make money,” says Milton.

“So at Nikola, there’s two reasons why we went into huge semi trucks. Number one is that the transportation industry is the second-largest polluter in the world. That drives us. So if we’re going to get rid of all the emissions, we can make a bigger impact there than anywhere else in the world. Number two is that it’s profitable. I teach this everywhere I go. You cannot be environmentally sustainable if you’re not financially sustainable. That’s the most important phrase I can ever tell people, and that’s why it’s so important to be in a market where you can actually make money, and you don’t need government subsidies to keep you alive.”

Those are tough words from a man whose company has yet to make a single production vehicle. Nonetheless, investors like what they hear, and as has already happened with Tesla, are driving up the market value of Nikola to unheard-of heights. In fact, and in spite of Milton confirming that Nikola’s first profit is some years away yet, the company’s listing on the Nasdaq exchange saw investors decide it was worth $30 billion (€26.7 billion) – more than Ford (in business since 1903) and Fiat (since 1899).

Does that valuation bring pressure with it? Yes, but according to Milton, it’s a righteous sort of pressure. “Nikola’s value on the Nasdaq was worth more than Ford, more than Fiat-Chrysler, and they despise us for that. They really have a hard time because they say; well, we’ve been around 50 or 100 years, we make hundreds of billions in revenue. What they don’t understand is that for my generation, and for the world right now, revenue is not everything. It’s about solving complex problems, and if you can solve complex problems, the revenue will come. The investors are patient. They’re asking: ‘Are you changing the world? Are you completely getting rid of emissions? Are you transforming transportation as we know it? Then I will invest in you, I believe in you, and you got my money. You got my retirement.’ And it’s my obligation now to go execute on that plan and actually deliver. And I think that’s why the markets reacted so well to Nikola.”

The name Nikola comes from Nikola Tesla, a Serbian-born scientist, largely forgotten in his day, but whose reputation has been revived and even partially deified in recent years. Of course, another company had already used the surname, but Elon Musk’s Tesla has so far focused entirely on battery power for its vehicles, eschewing – even being dismissive of – hydrogen power for vehicles. The hydrogen-versus-battery debate is likely to be the most significant one in car making for the next decade, at least.

“You know, Elon doesn’t like us that much. He calls the fuel cell the ‘fool cell’. And that’s okay; I just kind of laugh, because you don’t use batteries to send rockets to space. So, one size does not fit all. What it comes down to is that different technologies are going to work in different industries, and you can’t be so short-sighted to think that one thing will fix everything. Batteries are really good for everything up to 300 miles [500km] and inner-city distribution. Hydrogen is much better for everything when you’re talking about full loads, long range, quick turnarounds. We can actually make hydrogen now that’s even as cheap as battery electric to operate per mile, and that’s something we got a lot of criticism for. You see charts floating around that say, ‘Oh, look how inefficient hydrogen is’. That has nothing to do with the cost of driving a vehicle per mile. It’s just like saying, because solar panels only produce energy at 20 per cent, we shouldn’t use them – that’s absurdity.”

It can’t be a coincidence that in the wake of Nikola’s massive valuation, Elon Musk himself began tweeting about the need to get Tesla’s own HGV into production, and soon.

Musk’s derision for hydrogen fuel cell power is well known, but across the global car industry, many are questioning what’s better — hydrogen or batteries. Toyota and Hyundai have persisted with hydrogen car development, but others are less sure. The reluctance seems to stem from the investments needed. Hydrogen fuel is more convenient for the end-user, but requires massive investment in infrastructure, whereas electric power requires — in relative terms — only plugs and charging points. A study in Germany, by Horváth & Partners, has convinced Volkswagen for one that batteries are better, simply because hydrogen requires too much energy to extract, store, and transport before it ever gets near your actual car.

The study, entitled Automotive Industry 2035 – Forecasts for the Future, reckons that transmitting electrical current through the grid causes a loss of around eight per cent of the original generated power. There’s another roughly 18 per cent loss between the battery and the driven wheels, but that means that a battery electric car is roughly 70-80 per cent efficient in its use of power.

According to the report, the figures for hydrogen are much, much worse: “In the case of the hydrogen-powered e-car, the losses are much greater: 45 per cent of the energy is already lost during the production of hydrogen through electrolysis. Of this remaining 55 per cent of the original energy, another 55 per cent is lost when converting hydrogen into electricity within the vehicle. This means that the hydrogen-powered e-car only achieves an efficiency of between 25 to 35 per cent, depending on the model. In concrete terms this means that a hydrogen car consumes two to three times more electricity for the same distance than a battery car.”

“No sustainable economy can afford to use twice the amount of renewable energy to drive with fuel cell passenger cars rather than battery-powered vehicles,” says study leader Dietmar Voggenreiter.

Volkswagen, quoting the report, reckons that’s game, set, and match to battery cars over hydrogen cars, saying: “From every angle of the environmental balance sheet, everything speaks for the battery-powered e-car. The technology is mature and ready for the mass market. The number of models is growing steadily. And with the battery-powered e-car, driving remains affordable. Current e-models are already at the price level of comparable combustion engine models. In contrast, the hydrogen car will always remain more expensive than the battery car – due to the complex technology and high fuel costs. Drivers already pay around €9-12 per 100km for a hydrogen car, while battery cars cost only €2-7 per 100km, depending on electricity prices in individual countries. And the topic of long-distance travel? That will soon no longer play a role. With the new generation of e-cars, ranges will increase to 400km-600km, while charging will become increasingly faster.”

Of course, Nikola is all about producing heavy trucks, not cars, and Milton unsurprisingly disagrees, saying that when it comes to the kinds of vehicles his company is designing, hydrogen makes far more sense, not only in terms of fast refuelling times (minutes for a hydrogen fuel cell, compared to hours for big batteries), but also in terms of weight.

“Hydrogen powertrains are so much better at that point because you can save 5,000kg of weight compared to batteries. That is a lot of weight and a lot of payload saved. So, up to 300 miles batteries are awesome, over 300 miles hydrogen is awesome.”

Milton also disagrees with concerns that hydrogen infrastructure is too expensive.

“if you’re going to turn battery electric trucks around quickly and you need, say, a one-megawatt charger? Those are not cheap; they’re millions of bucks apiece. We can now produce hydrogen for between $2 and $4 a kilogram. We’re now cheaper than diesel to operate per-mile and we’re almost at parity with a battery electric per-mile, and ultimately that’s game over for diesel.”

Nikola has partnered with CNH Industrial, the maker of IVECO trucks, to begin production of its first lorries, and they will be sold in Europe, as well as across the world. Sadly, we probably won’t get the chance to buy Nikola’s other product — the Badger pickup truck. Milton announced the Badger just as Nikola’s stock went live on the Nasdaq, and it doubtless had a large part in driving the sky-high market valuation. Pickups sales alone have remained robust in the US market all through the Covid-19 lockdown, and they’re often seen as a cash-cow for the “Big Three” American car makers — Ford, GM, and Chrysler.

With a potential range on one tank of hydrogen of more than 1,000km, you can easily see the appeal of the Badger (even if, for now, it’s just a sketch) but Milton says that it’s unlikely to come to Europe when production starts in 2022.

“I don’t know if we’re gonna be able to bring the Badger to Europe because you deal with a lot smaller vehicles and with a big vehicle like that it’s very hard to even drive around certain parts of Europe. Now, in the USA, Canada and Australia obviously it will do well and there’s probably another dozen countries where the pickup truck will do really well, but in some areas, there’s just not enough room to drive a big Ford F-150 size truck.”