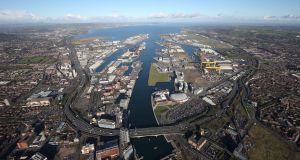 An aerial view of Belfast Harbour

Belfast Harbour reported a slight dip in revenues last year but said it had a strong base to weather the impact of the Covid-19 crisis.

It said trade through the port is proving “remarkably resilient” so far during the pandemic.

Early figures for the March to May period show trade volumes down between 20 to 25 per cent versus normal but in recent weeks throughput is running around 10 per cent down on last year.

Publishing its annual results, Belfast Harbour reported turnover of £65.9 million (€73 million) in 2019, down 4 per cent on the previous year. Operating profits declined 15 per cent to £30.6 million following record results in 2018.

It said the decline in earnings was primarily due to the completion of a major offshore windfarm contract and the ongoing decline in power station coal throughput.

Commenting on the coronavirus pandemic, Belfast Harbour chairman David Dobbin said the worst impacts had been in cruise, tourist and leisure activities which have all but ceased during the crisis.

“The scale of the challenge to get the economy back to pre-crisis levels and to recover our tourist and leisure trade is immense. However, Belfast Harbour’s sound financial position and ambitious investment plans will allow us to play a key role in helping drive the local recovery, working with our customers and key partners to get the economy back on track,” said Mr Dobbin.

The latest figures show trade remained strong last year with more than 24 million tonnes of cargo passing through the port. Ferry passenger number exceeded 1.5 million for the third year in a row, and there were a record 542,000 freight vehicles passing through, up 4 per cent on the prior year.

Last year, £44 million was invested in projects by the harbour, of which £40 million was for a scheme to automate container handling and upgrade the Belfast to Liverpool ferry terminal.

The harbour in 2019 also green-lighted £115.7 million in further investments.