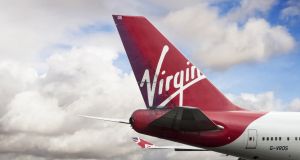 Virgin Atlantic had previously identified a £750 million funding requirement but the total value of the package it is trying to secure is now about £1 billion. Photograph: iStock

The commitment will help bolster the struggling airline’s cash reserves in the coming months in the face of a slow recovery in international air travel that has been decimated by the coronavirus pandemic.

While Virgin Group is planning to provide about £200 million in cash now, according to people close to the process, additional shareholder support of about £400 million has also been committed.

This will come from Delta Air Lines, which has a 49 per cent stake in the airline, as well as Virgin Group - the majority shareholder with a 51 per cent holding.

The £400 million is likely to be in the form of deferred payments such as brand fees and shared IT and back-office platforms. The deal will be structured to ensure no change in Virgin Atlantic’s current shareholding.

The cash injection comes as Virgin Atlantic is attempting to finalise a multipronged refinancing package of about £1 billion.

On top of the £600 million from existing shareholders, another key part of the airline’s rescue package is expected to come from private investors, who will provide about £250 million in debt funding.

Over the weekend, US private equity group Centerbridge Partners re-entered talks with the airline – alongside hedge funds Davidson Kempner Capital Management and Elliott, according to people close to the talks.

Both Davidson Kempner and Elliott declined to comment and Centerbridge did not respond to a request for comment at the time of publication.

Virgin Group has previously committed to investing money into Virgin Atlantic but has only recently settled on the figure.

It comes after it sold $366 million (€327 million) worth of shares in Virgin Galactic, its space travel company, in May to help fund other Virgin businesses hit hard by the coronavirus pandemic. Virgin Group declined to comment.

Virgin Atlantic had previously identified a £750 million funding requirement but the total value of the package it is trying to secure is now about £1 billion. Discussions are expected to roll into next week, with the hope that a package will be finalised by early July.

The remaining components of the rescue package includes negotiations with credit card providers, which are withholding about £250 million of funds, and talks with aircraft lessors and regulators over deferment of fees.

In April, the Financial Times revealed that the airline had hired investment bank Houlihan Lokey to look at private funding options after the UK government rejected the airline’s initial submission for £500 million of state aid. The UK government was unimpressed by the group’s failure to first seek investment elsewhere.

Since then, the airline has focused on its search for private investment but still remains in discussions with the government.

Virgin Atlantic is cutting almost a third of its 10,000 workforce and closing its London Gatwick operations as the airline scales back to survive the coronavirus crisis. The airline has warned that it expects it to take up to three years to return to 2019 traffic levels. – Copyright The Financial Times Limited 2020

1 If international visitors are pariahs should we not be testing them on arrival?
2 Belgium helps Ireland to a Brexit boon
3 ‘My rent here is so low it’s a joke’
4 Can Grafton Street stop the flood of closures?
5 Varadkar to meet banks in row over interest on mortgage payment breaks
6 WeWork on track for profits in 2021, says chairman
7 Business ‘will not survive’ on essential-only travel - task force
8 ‘Sad day’ for House of Ireland as tourism retailer goes out of business
9 AIB to compensate another 1,100 tracker mortgage holders
10 The €1 billion market: retailers who serve tourists face double trouble in a pandemic
Real news has value SUBSCRIBE