From the Audi e-Tron to Volvo XC40 P8, via Nissan and Tesla, we rate a full 36 models 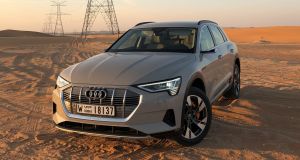 e-Tron: Audi’s big all-electric SUV isn’t cheap, but once you’re on board you see why. The cabin is beautifully built, and performance is impressive

The proposed programme for government states an intention to copper-fasten, with legislation, the proposal to ban sales of all petrol- and diesel-engined cars by 2030, creating an electric-only market. Dealers, importers, and carmakers are crying foul – saying that 2040 is a much more realistic date, but the road to a fully EV market starts here. This is where you’ll find our pick of the best current (no pun intended) models, and a look ahead to some of the major new battery-powered cars coming down the road in the next six to 12 months.

Price €74,990-€99,810
Range 436-446km
Verdict Audi’s big all-electric SUV sure isn’t cheap, but once you’re on board you see why. The cabin is beautifully built, and performance (both in terms of range and acceleration) is impressive. Sleeker Sportback and sportier S models are on the way soon.

Price €37,155-€40,495
Range 309km
Verdict The styling is polarising and things such as the infotainment system haven’t kept pace with the times, but the i3 is still a hugely impressive electric car. Latest 120ah battery has inter-city range, and it’s actually good fun to drive. Four seats only, though.

Price TBA
Range 401km
Verdict BMW’s first all-electric SUV takes the basic bodywork of the existing X3 and adds battery power and a nose-job. Range should be impressive, but will we be able to get along with the front-end styling?

Price TBA
Range TBA
Verdict Citroen replaces the Cactus with this fastback hatch that also, kind of, wants to be a crossover. We’re waiting on technical details, but the cabin looks nice and we like that the fastback styling reminds us of the 1970 Citroen GS.

Price TBA
Range 320km
Verdict It looks the same as the 2007 500 (give or take) but the 500e is actually new under the skin. The cabin is roomier, and better built, and it has much better one-charge range than its Honda and Mini rivals. Will Irish buyers still be drawn to the Fiat brand, though?

Price About €50,000 (TBC)
Range 433-596km
Verdict Ford has been in the doldrums of late but this Tesla-rivalling electric crossover could spark a Blue Oval renaissance.

Price TBA
Range 222km
Verdict We utterly love the looks, inside and out, but it won’t be cheap and it won’t go as far on a charge as you’d like it to. is Ireland ready for a premium-priced, urban-only, electric car?

Price €34,850
Range 312km
Verdict Looks rather similar to the outgoing version, but a bigger battery has given the sensible-shoes Ioniq much improved range, and it remains a reliably rational choice.

Price €38,630-€41,230
Range 449km
Verdict Already a big-seller in Ireland and you can see why. It’s not cheap, but the electric Kona offers more one-charge range (and it’s a reliable, useable range) that beats luxury models costing multiples of the price. Our only quibble is a slightly cheap-feeling cabin.

Price €92,895-€109,285
Range 480km
Verdict Jaguar stole a march on most rivals by getting the I-Pace to the market before the likes of Audi, Mercedes, and BMW, and it remains a hugely impressive car. Range is a little shorter, overall, than you’d like but it’s exceptionally good to drive, and better looking than its German competition.

Price €31,995-€37,995
Range 452km
Verdict Get the e-Soul in white and it looks, from the front, like a Star Wars stormtrooper. If that’s not enough for you, then check out the long (and reliable) range, and the cabin that looks and feels a little nicer than that of its Hyundai Kona cousin.

Price TBA
Range 300km
Verdict The UX300e won’t hit Irish dealerships until later this year, but if it can mix a decent one-charge range with the impressive cabin and handling of the hybrid UX250h, then it could be winner.

Price €32,295
Range 210km
Verdict Mazda’s taking a gamble that what we want is an EV with very high quality, a sharp driving experience, a reasonable price, but short range. That’s a big bet, especially when the public charging network is still in its infancy. A likable car, but will it sell?

Price €89,450-€105,882
Range 417km
Verdict The EQC has imposing, quasi-futuristic styling and feels both rapid and luxurious, but it’s a little compromised by using the chassis from the diesel GLC SUV, and the driving position is unexpectedly awkward.

Price TBA
Range 405km
Verdict Is it wrong to be quite so excited about a converted van full of batteries? Well, perhaps, but we’re still looking forward to trying Merc’s big, electric, MPV. We love the existing V-Class as a classy, understated way to get around, which bodes well.

Price TBA
Range 700km (approx)
Verdict Mercedes is on the cusp of revealing this, the EQS, which with its gargantuan range and S-Class luxury levels could be a major game changer for electric cars in general.

Price €29,890-€40,500
Range 270-385km
Verdict The one that started it all, but the Leaf is not ageing well. Expensive new 62kWh ‘big battery’ version is not worth the extra, given how short-ranged it is, but the basic 40kWh version is still a decent choice. Cabin looks and feels very old-fashioned though.

Price €27,338
Range 336km
Verdict Arguably, the Corsa-e is the most mainstream electric car yet – its quiet styling and decent performance make it seem an ideal EV choice for those of a conservative bent.

Price €27,334-€32,980
Range 350km
Verdict Mechanically the same as the Corsa-e, the e-208 steps in front of its German cousin by being sharper to look at, and having a really gorgeous cabin. Yes, it’s pricey for a small car and space in the back isn’t great, but as far as electric cars go, this might just be our favourite right now.

Price TBA
Range 310km
Verdict We’re waiting to try the electric 2008, but a car with the basic appeal of the smaller e-208, just with more space inside, sounds like a good idea to us.

Price TBA
Range 230-330km
Verdict Peugeot’s roomy MPV pulls one out over its Citroen in-house rival by using an optional 75kWh battery that gives it much better range.

Price €115,375-€192,197
Range 388-412km
Verdict Earth-shattering speed with Earth-saving tech. We always said that Tesla would, having kicked off the electric car revolution, have to start looking over its shoulder as others caught up. That time is now.

Price €26,990-€31,990
Range 395km
Verdict Renault’s Zoe, having once had the small electric car market to itself, now has fierce competition from Peugeot and Opel, with more on the way. This new model hits back hard with lengthy one-charge range and a much-improved cabin. The more expensive R135 is the better buy is you like an electric surge.

Price €50,000 (approx, TBA)
Range 340-460km
Verdict Skoda’s first EV is this chunky crossover which feels impressively solid and sure-footed on the road. As well it might do, thanks to intensive prototype testing on Irish tarmac. It’s the closest we’ll get to a home-grown EV hero, but it won’t be cheap.

Price €48,900-€64,490
Range 409-560km
Verdict In some ways, the Tesla Model 3 is the most impressive electric car around at the moment. It’s fast, it’s good fun to drive, and it’s well-priced relative to conventional rivals. However, there are still grating quality glitches, and Tesla’s habit of over-promising and under-delivering doesn’t help matters.

Price TBA
Range 389-541km
Verdict All of the 3’s vices and virtues, but with seven-seats and a bigger boot. The Californian carmaker has already hit snags getting the Y into full production, so we may have to wait a while yet, but given how popular the 3 is, would you bet against a glut of these on Irish roads this time next year?

Price €84,990-€100,990
Range 593-610km
Verdict Tesla’s original rule breaker. Amazing batteries and performance, but too many cheap bits and pieces still to be found in the cabin. That’s bad enough on the Model 3, but in a car priced against the Mercedes S-Class, it’s unforgivable. Still, it’s a tempting vehicle and Tesla is working on longer-range and higher-performance versions as we write.

Price €90,990-€106,990
Range 487-507km
Verdict A car dominated by its dramatic doors, the Model X is the electric car that brings the kid out in you – the gullwing rear doors, the built-in games on the touchscreen, and the fart-noise whoopee cushion function. It’s a serious car too – seriously impressive range, seriously impressive performance, and seriously impressive Supercharger charging points. Again, though, there are still niggling quality issues that should have been ironed out by now.

Price €33,000-€50,000 (approx)
Range 330-420km
Verdict The most important new VW since the Beetle? It sure could be, if that is VW can actually get it on sale on time this summer as promised. Much-publicised software glitches are proving a major headache, and only the most expensive models will be arriving at first, but once the ID.3 comes fully on stream, it could change public perceptions and attitudes to electric cars in a dramatic fashion.

Price TBA
Range 480km (approx)
Verdict VW expands the electric ID range with this Tiguan-sized crossover which looks, judging from the concept versions we’ve seen so far, much more desirable than the slightly-too soft-edged ID.3. Given how well the Tiguan sells, expect this to be a hugely popular car once it arrives next year.

Price TBA
Range 590km (approx)
Verdict So far, all we’ve seen of the third pillar of the Volkswagen ID electric car range is a concept called the ID. Space Vizzion, but this big, Passat-sized, estate looked almost production-ready and VW says it will be on sale by late 2021. Expect a big 82kWh battery pack and a Tesla-beating one-charge range.

Price TBA
Range 400km
Verdict Volvo is aiming its new all-electric XC40 right at Tesla, and has benchmarked the P8’s battery and one-charge range directly against the big-selling Model 3. The Recharge name will eventually be used on all of Volvo’s electric and plugin-hybrid models.